The latest DVD set of Swedish detective drama Beck is now available. It’s a keeper, as it contains the final five episodes with Mikael Persbrandt as Gunvald Larsson.

After costarring alongside Peter Haber for thirty episodes of Beck over the course of nearly twenty years, Mikael Persbrandt has retired his iconic role as Detective Gunvald Larsson.

If you’ve been sobbing into your Swedish meatballs about Persbrandt’s departure from one of the most popular global Euro TV series, join the club. Beck fans everywhere (yours truly included) were gobsmacked by the news, and I actually felt gutted during the closing scene of his final episode, when the concept of “no more Persbrandt” became reality and hit me like one of Gunvald’s punches.

But the sadness of knowing we will see no more of the blue-eyed, nattily-dressed, and irascible (and sexy as all get-out — there, I said what nearly all of you are thinking) Gunvald Larsson is tempered with the UK release of Beck: The Series: Volume 1. 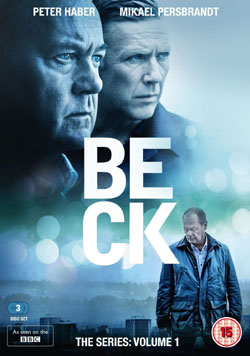 The latter four started premiering in Sweden on TV4 in January 2015, and in the UK on BBC Four in September. BBC Four began its Beck run with Episode 26. (Why not Episode 25, too? No clue.)

For fans of Beck, these films give us more of what we love about the series: well-plotted crime stories with intriguing characters, the dynamics of Beck’s team (notably between Gunvald and his occasional sidekick, Detective Oskar Bergman, played by Måns Nathanaelson), and Martin’s relationships with Gunvald, his no-holds-barred daughter Inger (Rebecka Hemse), and Valdemar (Ingvar Hirdwall), his orange-haired, neck-brace-wearing, alcohol-swilling neighbor.

And there’s a new title credits sequence in Series 5. It is quite stylish, with its contemporary, Nordic noir look, and comes complete with new Beck theme music.

A hoodied attacker ambushes District Attorney Annika Runfelt (Jessica Zandén, Johan Falk) at a car wash, minutes after bikers had slowly cruised by and caused her a fright. When her now-dead body is found inside a wood box, hermetically sealed and buried in a children’s playground sandbox, her murder looks to be the work of a notorious motorcycle gang that had threatened her.

Violence-averse Oskar is likewise on edge when he and Gunvald go to a biker bar to look for the prime suspect, gang leader Matte Larsson (Peter Järn, Wallander). They don’t find him. Yet. Then someone stumbles onto another victim. Meanwhile, the serial killer is making more coffins… and making too-close-for-comfort contact with Martin.

Even though there are a few continuity flubs (mostly unnoticeable unless you pick apart the episode), Beck: Buried Alive, written by the husband-and-wife team of Cilla and Rolf Börjlind (Spring Tide), is so intricately and tightly constructed that I was tempted to pull out pen and paper to track the links between the victims and the killer. And I was genuinely frightened for Martin, despite knowing he’d be okay. Still, it’s a riveting watch, and seeing a longish-haired and bearded Persbrandt hurts not one bit.

Two thugs assault businessman Peter Ahre (Niklas Hjulström, Annika Bengtzon) and steal his car. A chambermaid finds the naked, dead body of a girl in Room 302 of Hotel Ture. And the new forensic pathologist, Gunilla Urst (Anu Sinisalo, Easy Living), confirms what crime scene investigator Andrea Bergström (Åsa Karlin, Double Life) said: the girl had been partying and was strangled to death. Oddly, details of Ahre’s story don’t sync with the evidence, as his credit card was used to pay for the hotel room on the other side of town.

Not only do the detectives have two incidents to investigate, they also have a new boss: Police Chief Klas Fredén (Jonas Karlsson, The Inspector and the Sea). Despite his nice shoes, he gets off on the wrong foot with Gunvald by making a bad call. What Fredén does that’s helpful is borrow Ayda Çetin (Elmira Arikan, Mammoth), a brilliant and near-emotionless civilian data analyst from Vice, to support Martin’s team, which now includes junior detective Jenny Bodén (Anna Asp, Frostbitten), seemingly the most well-adjusted person of the lot. With Ayda’s help, Martin and co have several men as potential murder suspects, and a series of lies to untangle to uncover the actual killer.

Dark as it is, Beck: Room 302 has more lighter moments and instances of humor than I recall in others. A few can even elicit laugh-out-loud responses. What’s still sad, though, is the still-lonely state of both Martin and Gunvald’s personal lives. Daniel Sjöberg (Blue Eyes) and Sofia Zouagui (Camilla Läckberg’s The Fjällbacka Murders) have recurring roles as Inger’s boyfriend Tomas and Oskar’s girlfriend Petra, respectively.

Crime boss Zlatko Lozanovic survives a lone gunman’s shots on the street, but doesn’t when a sniper kills him in front of his wife Charlotta (Marie Robertson, Real Humans) and father-in-law Bertil (Björn Andersson, Modus) with a bullet through the window of his home. Zlatko had enemies throughout Stockholm’s criminal underworld, and Martin and his team, along with Rimfors (Johannes Brost, Jordskott) from Narcotics, must find the murderer before one of Zlatko’s crew does. Unfortunately, the next victim is someone the police don’t connect to the mobster until it’s too late.

As the investigation progresses, Gunvald and Charlotta grow close (ahem), while Gunilla seems to be making romantic overtures toward Martin (ahem ahem), and Oskar prepares to be a pappa with the pregnant Petra. In addition to the still-unsolved murder case, something else is troubling Martin: A bully has been threatening his grandson Vilhelm (newcomer Tommy Wättring), but Inger doesn’t want Martin to get involved.

This episode finds Gunvald getting as up close and personal as he’s ever gotten to a woman in the entire series, revealing a softer, deeper, accessible gentleman, quite the opposite of the near-misogynistic boor he usually comes off as. And for as often as Martin can wuss out, it’s good to see him step in when needs must, and also to give Oskar more responsibility. As for Klas, he’s a health nut, but one aspect of his hygiene leaves much to be desired, at least for Gunvald. Other guest stars include Antti Reini (Private Eye Vares) and Richard Forsgren (Jordskott).

Two boys discover the mostly-buried body of a man in the woods, and inquiries into the victim’s identity lead the detectives to another man, whom they also find murdered. Speculations that conflicts within an Islamist terror cell could connect the two victims result in Martin and co having to cooperate with SÄPO, the Swedish Security Service. As the investigation continues, the team finds links to illegal activities at the second victim’s company, which leads Martin to businessman Thomas Engberg (Simon Norrthon, Modus, Medicine Man), and to Chechen immigrant Jamil (Alexej Manvelov, Occupied) being the prime suspect in the second murder.

In other goings-on, Gunilla lets on that she’s interested in more than dead bodies and knows more about Martin than he realized, Gunvald insists that Oskar names his baby after him (Gun if it’s a girl), and Klas gives Martin homework for his performance review.

While good overall, this episode isn’t as well-structured as the others, as the red herrings tend to muddle the storyline. The focus on societal issues in Sweden, from xenophobia to human trafficking, isn’t new either, but in light of recent events in Europe, it’s worth noting how people have become conditioned to view immigrants.

An elderly woman with an incurable disease dies in hospital, where a syringe with morphine lies near her chair. It might have been a mercy killing, an accident, a natural death, or murder, and her son, Petter Lindvall (Mårten Svedberg, Johan Falk), is convinced Dr. Johan Fors (Johan Holmberg, The Girl Who Kicked the Hornets’ Nest) killed his mum. Then Fors plunges to his own death from the hospital roof.

Gunvald is more irritable than usual with a days-long headache as he, Martin, and the rest of the team investigate both deaths. Their interrogations of several suspects, including Petter, fellow doctor Vibeke (Camiila Bendix, The Bridge), some nurses, and Fors’ widow Eva (Gunilla Backman, The Sandhamn Murders), uncover a secret that might have been the motive for Fors’ murder. Outside of the two cases, Martin and Gunilla get to know each other better, and Valdemar wants Martin to join him on a singles cruise.

This is the last-ever episode of Beck with Mikael Persbrandt, and I must say the ending is the saddest, sweetest, most poignant of the thirty episodes that have aired to date. And that’s all I’ll say about it, as I want you to savor it yourself.

All five episodes of Beck: The Series: Volume 1 are shown in Swedish with English subtitles.

The next season of Beck premieres in Sweden in January 2016.