Corpse discovered, check. Troubled detective, check. Nordic noir, not so much. In the Sweden of The Sandhamn Murders (Morden I Sandhamn), the sky is sunny and blue and the waters of the archipelago are warm and inviting while killers are on the loose.

Based on the crime novels by Viveca Stens (which have not yet been translated from Swedish to English), The Sandhamn Murders

centers on crimes committed on Sandhamn, a pictureque and idyllic island in the Stockholm archipelago. 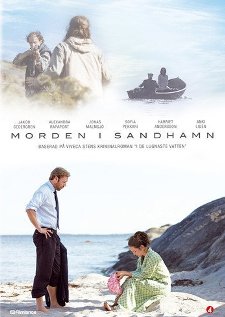 In the opener of the first three-part story, Sandhamn summer resident Nora Lindé (Alexandra Rapaport, The Hunt) literally bumps into a corpse that has surfaced while she is swimming at the beach. The island is under the jurisdiction of the Nacka Police, so Thomas Andreasson (Jakob Cedergren, Those Who Kill), a insomniac cop with a devastating tragedy in his past, goes to investigate.

Soon after the identity of the dead man is discovered, there is another death, one that is likely linked to the murdered man found wrapped in fishing netting, but Thomas and his colleague Carina Persson (Sofia Pekkari, Wallander) are having a dickens of a time coming up with evidence to solve either case.

Help comes in the form of Nora, a married mother of two and bank attorney who happens to have gone to the same school as Thomas. As the two get reacquainted, she helps him to find answers, despite her husband Henrik’s (Jonas Malmsjö, Anno 1790) misgivings about the pair’s relationship. As pieces of the puzzle start coming together, Nora finds herself in grave danger when she learns the truth, and Thomas must find her before she becomes another victim.

In Season 2’s The Sandham Murders: Closed Circles (Morden I Sandhamn: I Den Innersta Kretsen), Henrik and Team Juliander are competing in yachting’s Round Gotland Race while Nora is hosting a party for the event. The team wins and everyone on board and ashore are celebrating with champagne… until the captain, Oscar, keels over from being shot dead.

Thomas’ new partner, Mia Holmgren (Sandra Andreis, The Girl with the Dragon Tattoo), does a bit of forensic work and finds that the shot came from either Nora’s house or the vacant one next door. If one of the party guests did the dirty deed, what was the motive? The case gets complicated when another member of the KSSS board, of which Oscar had been the chairman, gets killed. Nora, who has filed for divorce and is still eyeing Thomas, helps the detective with her banking knowledge, ascertains the identity of the murderer, and soon finds herself in a situation that could get her killed, too.

And in Season 3’s The Sandham Murders: Guiltless (Morden I Sandhamn: I Grunden Utan Skuld), the fun of children playing hide-and-seek in the woods comes to an abrupt halt when one of them sends a shrill scream through the forest; she has found a decaying dismembered human arm.

The investigation leads Thomas and Mia to the friends and family of Lina Rosén, an 18-year-old girl who, after a boating accident a year earlier, went missing and was thought to have committed suicide. Then another teen girl goes missing. Her disappearance could be connected to Lina’s murder, but how and why? The now-divorced Nora discovers a lead for Thomas, who has recently reconnected with his ex-wife, and then learns who the killer is. This time the danger involves her two kids… and Thomas.

In many ways, The Sandhamn Murders

is a breath of fresh air from the doom and gloom of many Nordic noir crime dramas. Summertime at the archipelago is shown in full view from shots that display its glistening waters, spectacular sunsets, and colorful rooftops. And its lead character, Thomas, manages to move beyond the tragedy that haunts him in Season 1 and gets on with his life. Darkness doesn’t linger in the series, which makes watching it less emotionally taxing (unless you count the ongoing will-they-or-won’t-they between Thomas and Nora), but just as engrossing.

All nine episodes of The Sandhamn Murders, shown in Swedish with English subtitles, are available for streaming at Hulu. (Note: Streaming to televisions or portable device is not available for Hulu Plus subscribers.)

A new season of The Sandhamn Murders goes into production this Fall.