The authors of Spring Tide (Springfloden) are Cilla and Rolf Börjlind, who, prior to becoming novelists, wrote the entire first series of Arne Dahl,

and most (Cilla) or all (Rolf) of the hit series, Beck.

Whether the Börjlinds adapt their first published title (of three to date) for television has yet to be announced, but Swedish newspaper Aftonbladet has revealed that 2014 Stockholm Film Festival Rising Star Award winner Julia Ragnarsson (The Bridge, Wallander), and two-time Guldbagge Awards winner Kjell Bergqvist (Death of a Pilgrim, 30 Degrees in February), will star in the new Filmlance series for Swedish broadcaster SVT. 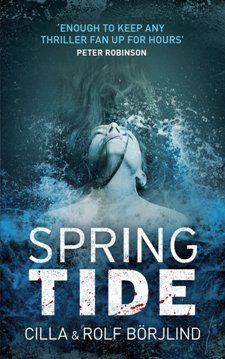 alternates between the time lines of 1987 and 2011. The latter follows Police Academy Cadet Olivia Rönning (Ragnarsson) and her work for a class assignment: She is tasked with unraveling the mystery of a cold case from 1987, one in which three people sadistically murdered a young woman on a Koster Islands beach — a killing that a young boy inadvertently witnessed.

At that time, national homicide investigator Tom Stilton (Bergqvist) was unable to solve the case, since he couldn’t ascertain the victim’s identity, locate the murderers, or establish a motive for the killing. And so it was shelved. Fifteen years later, he took a new approach to the case, but a bruising divorce left Stilton in a fragile mental state that deteriorated even further.

As Rönning digs through case files, she sorts out as much as she can, but there are still many questions left unanswered. What would really help her is getting input from the now-former detective, the homeless Stilton.

Said producer Francy Suntinger of Filmlance, the production company behind Arne Dahl and Beck, “We at Filmlance have had a long and successful collaboration with Rolf and Cilla Börjlind, so we are especially pleased and proud to […] also adapt their bestselling novel for a television series.”

The ten-episode Spring Tide is expected to premiere in Sweden in 2016.

Stay tuned for information about whether the series will screen in the US and/or UK.