It’s Swedish and it’s dark, but forget the deliberately slow pace of Nordic noir. Johan Falk: Season One is one action-packed thrill ride after another. Fasten your seatbelts.

brings Jakob Eklund back for six suspenseful crime stories as the intense, tough, stubborn, often enraging Swedish cop, Johan Falk. Not only that, the film series brings to the screen one of the most conflicted, desperate, and sympathetic characters in Scandinavian crime thrillers: the gangster/informant Frank Wagner, played brilliantly by Joel Kinnaman (The Killing, The Girl with the Dragon Tattoo).

We meet Wagner in “Special Operations Group” (“Gruppen för Särskilda Insatser“). After five years working for Europol in the Hague following the events in “The Third Wave” (from the Johan Falk Trilogy),

Falk returns to the Gothenburg Police, only this time as a member of GSI, the elite unit that specializes in organized crime. But the new job has a high personal price: Falk’s longtime girlfriend Helén (Eklund’s real-life wife Marie Richardson, Verdict: Revised) won’t move with him back to Gothenburg with their five-year-old son Ola and her teenaged daughter Nina.

In what should have been a straightforward mission for the GSI team, including Johan, unit leader Patrik Agrell (Mikael Tornving), and officers Sophie Nordh (Meliz Karlge, Walk the Talk), Lasse Karlsson (Henrik Norlén, Death of a Pilgrim), Dick Jörgensen (André Sjöberg, Real Humans), and Tommy Ridders (Reuben Sallmander, Irene Huss), Tommy gets killed and Frank Wagner is on the hook for the shooting. Frank goes to Johan for help and reveals that Tommy had been his handler at GSI. Falk realizes then that GSI’s unusually-high success rate has been due to using criminal informants. With Tommy dead and Frank now trusting Johan, Patrik makes Johan Frank’s new handler.

The danger for Frank Wagner heats up in “Brothers In Arms” (“Vapenbröder”), when a deal for assault weapons between his gangster boss, Seth Rydell (Jens Hultén, Kommissarie Winter), and a Norwegian undercover operative doesn’t go down as planned by GSI. Wagner wants out as an informant to protect his wife and baby, but Falk needs his help in order to get the weapons, Rydell, and Asim Popov (Thomas W. Gabrielsson, The Protectors), a high-level mafioso in the Estonian-Russian Karayan mob made up of former KGB intelligence officers.

In “National Target,” the massive drug problem in Sweden prompts a GSI crackdown, which leads to the team’s realization that they have the infamous Russian mobster known only as Mr. K in their sights. Falk recruits Wagner to infiltrate Mr. K’s organization under the pretext of wanting to buy a large quantity of pure Estonian amphetamines. It’s a dangerous mission for Frank, but also one with direct and devastating consequences for his wife, Marie (Ruth Vega Fernandez, Wallander).

Peter Andersson (Jack Ryan: Shadow Recruit) reprises his role as Leo Gaut from “Zero Tolerance” (also from the trilogy) in “Leo Gaut.” Out of prison for a few years, Leo has gone legit as a restauranteur with his wife Eva (Helén Söderqvist, Irene Huss). But gangsters wanting a piece of the business have been escalating their threats with deadly force, and Falk must stop the vengeance-minded Leo from making matters even worse. 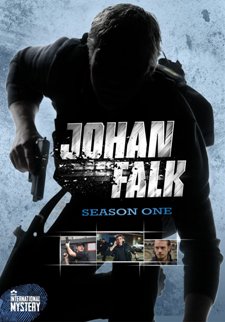 GSI is tasked with bringing down whoever is behind the illegal trafficking and forced prostituion of young Eastern European women in Sweden in “Operation Nightingale” (“Operation Näktergal”). Johan and Lasse recruit Hanna (Anja Antonowicz, Lindenstraße), a young Polish girl, to infiltrate the business of career criminal Oleg Myshkin (Stipe Erceg, Donna Leon), but her taking actions beyond those planned, coupled with Lasse’s feelings for her, could endanger the mission and their lives.

And in “The Outlawed” (“De Fredlösa”), stuff hits the fan following a bombing at a prosecutor’s home during a high-profile trial. The discovery that there is another bomb somewhere in Gothenburg makes finding the killer that much more urgent, so Johan persuades Frank to track down who it is. Frank, knowing he’s being exploited and desperately wanting out from under, pleads for assurances that he will get the new identity and life that Tommy had promised him in exchange for his help. Only Johan can’t give him any.

In related matters, the police are under media scrutiny, so top brass and senior officers, including Commissioner Franzén (Maria Hörnelius, Selma), Lennart Jägerström (Irene Huss), and Anja Månsdottir (Jacqueline Ramel, Beck), each of whom is well aware of GSI using criminal informants in their investigations, scapegoat the unit. And Wagner, stuck between a rock and a hard place, takes matters into his own hands while helping Falk once again, and lives to regret having ever gotten involved with GSI.

As the lead in the Johan Falk series of films, Jakob Eklund does a fine job of portraying the titular character. However, it is Joel Kinnaman who is the real star of Johan Falk: Season One.

He gives such a superb performance, and is so utterly compelling and convincing as the tortured Frank Wagner, that he overshadows all others in the four episodes where Wagner figures prominently, and makes the arc of his double life and complicated relationship with Falk the most gripping story of the entire series.