The wait is just about over. Just shy of a two-year absence from our screens, the third series of The Bridge is finally making its premiere in the UK this weekend.

This poor woman has been through the ringer. She couldn’t save the eldest son of her Danish colleague, Martin. Then she put him, her only friend and now-former partner, behind bars for murder, leaving herself friendless once again. If that wasn’t bad enough, her boyfriend left her. Triple ouch.

More than a year later, she is still reeling.

So what could possibly happen in Saga’s life next?

“Saga must deal with immense trials and tribulations. And she is confronted with her past on several levels. You get much more about her background. So she will have a very hard time both privately and professionally.”

The Bridge III opens thirteen months after the Season 2 finale. The dead body of a woman is discovered, made up and posed in a macabre way, at a construction site in Malmö, Sweden. She was Helle Anker, a lesbian commentator on gender issues and the owner of Denmark’s first gender-neutral nursery school.

This is a cross-border crime, so Saga’s boss, Hans (Dag Malmberg), assigns her to the case with a Danish detective from Lillian’s (Sarah Boberg) team in Copenhagen. The thing is, their working relationship is nowhere near the friendly one she had with Martin, so Saga gets a new partner from Denmark in Henrik Sabroe (Thure Lindhardt, The Borgias, Flame and Citron), a man with secrets. As the investigation continues, more gruesome murders take place and the pair must figure out if and how they’re linked as they grow closer.

At about the same time the first victim is found, Saga’s estranged mother, Marie-Louise (Ann Petrén, Jordskott, Everlasting Moments), pops back into her life, with a different version of what had happened to Saga’s sister and a threat to reveal the secrets Saga has kept hidden. And then Linn Björkman (Maria Kulle, Crimes of Passion, Annika Bengtzon) arrives to take over for Hans.

Saga has been fragile since she turned Martin in, and the new upheaval in her personal life, combined with doubts amongst her colleagues, are only adding to her psychological and emotional overload.

Others in the cast of The Bridge III include Rafael Pettersson, who reprises his role as John, the Swedish team’s investigator/researcher, Nicolas Bro (1864, The Killing), Olaf Johannessen (1864, The Killing), Melinda Kinnaman (Modus, The Eagle), Louise Peterhoff (Blue Eyes, Real Humans), Sonja Richter (The Eagle, The Killing), and Reuben Sallmander (Irene Huss, Maria Wern). 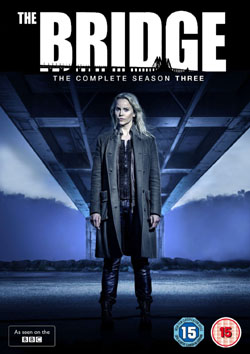 Not only is there a stellar cast, music from Bob Dylan also features in the third series of The Bridge, which broke several viewership records when it premiered in the Nordic countries.

Viewers in the US will have to wait a while longer. The second series of The Bridge didn’t premiere on Hulu until a year after the UK debut, although Series 3 could arrive stateside in less time. But if you want to watch it sooner, the Region 2 DVD will be released on 21 December 2015.