It’s March, and the chills of winter are still with us. So let’s head for the warmth of Thailand, like the characters in the hit Swedish drama, 30 Degrees in February.

Nordic noir, it isn’t. Fabulous, it is. It being 30 Degrees in February (30 grader i februari), the 2012 Kristallen Award winner for Best TV Drama that wowed both viewers and critics alike when it premiered in Sweden earlier that year.

This 10-part, character-driven drama follows the stories of a few Swedes who leave the cold and snow of the Scandinavian winter behind, and head for the warm, sandy beaches of Thailand. Each has their own reason, their own dream, for jetting off, and each of us can recognize and/or relate to them.

Majlis (Lotta Tejle, The Sandhamn Murders) is the long-suffering, middle-aged wife of Bengt (Kjell Bergqvist, Spring Tide), an abusive, mean-spirited, wheelchair-bound ex-pilot. She books the holiday in Thailand to give them some fun in the sun, but more importantly to give herself the chance to be treated with dignity, to experience a bit of adventure, and to get a taste of freedom, away from the confines of their home, where she cares for the constantly nagging, belittling, and soul-destroying Bengt day in and day out. Once there, Majlis wants them to retire in Thailand, and he wants them to go home to Sweden. Only one of them will get their way.

Glenn ((Kjell Wilhelmsen, Blue Eyes) is an engineer, one who is lonely, on the hefty side, and pretty naive for a 45-year-old man. He can’t imagine life without a wife and kids, and wants nothing more than to have a family of his own. But he’s had zero luck with women in Sweden, so off to Thailand he goes. Perhaps he’ll have better luck there. With a few liberties taken in his online profile, he meets a young Thai woman through the Internet. Now to meet her in person, get to know her, propose, get married, and start having children. Except his dream of settling down with her and their kids isn’t the dream she has for herself.

Kajsa (Maria Lundqvist, Everlasting Moments), an architect and single mum of daughters Joy (Hanna Ardéhn, Double Life) and Wilda (newcomer Viola Weidemann), is recovering from a stroke. She needs a change from her workaholic lifestyle, so with visions of making a fresh start by reliving the past on a permanent basis, she quits her job and moves with her kids to Thailand, where they had holidayed on the island of Happiness. The thing is, Kajsa is still ambitious, and with the Happiness bungalows having fallen into disrepair, she has an idea.

But Chan (Thomas Chaanhing, Backgammon), whom they’d met on their prior trip, and who also left Sweden for Thailand in order to find his estranged son Pong (newcomer Sanong Sudla), is thinking the same thing. 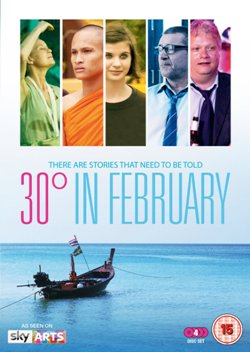 Majlis, Glenn, and Kajsa each experience events that rock their worlds, and not necessarily in a good way. The most horrifying one: the tsunami.

But along the way, certain people cross their paths and offer something they hadn’t known before. For example, Sara (Rebecka Hemse, Beck), a Swedish scuba instructor, and Oh (Djuangjai Hirunsri, The Last Executioner), a local Thai woman.

It is through these individuals and events and this journey called life that Majlis, Glenn, and Kajsa learn to transcend their limits, physical or otherwise, and experience love, the satisfaction of self-fulfillment, the spirit of cooperation, and more.

Each of their stories is compelling in its own way, but the strands featuring Majlis and Glenn will grip you by the heartstrings. Kjell Wilhelmsen’s portrayal of the innocent and trusting teddy bear Glenn elicits, by turns, pity and compassion, and at times outbursts of “What are you doing?!?” (But you still want to give him a big ol’ hug in the end.)

The knockout performance belongs to Lotta Tejle, a Best Actress nominee at the  2013 International Emmy® Awards. Her portrayal of the oppressed wife and caretaker, whose only desire is to taste a bit of joy in life, is utterly heart-wrenching and brilliant.

Also noteworthy is “Vinjett,” the series’ theme song, composed by Andreas Söderström and Johan Berthling. As I wrote in “The 10 Best Euro TV Theme Songs,” the exotic, sensual music “evokes a sense of longing, the feeling of the faraway… a siren song-like beckoning…” It’s incredible, and one of 26 tunes on the 30 Grader i Februari soundtrack.

Season 1 of 30 Degrees in February, a production of Fundament Film AB, in co-production with SVT, is now streaming, in Swedish with English subtitles, on Netflix US.

(Viewers in the UK can stream it on Amazon Video and Sky Go.)

The second season of 30 Degrees in February, a co-production of Anagram and SVT, had its world premiere at this year’s Göteborg Film Festival, and debuted on SVT in Sweden on the 1st of February 2016.