It’s a big week in Euro TV premieres for stateside fans, including a prequel series of sorts to a mystery drama from Sweden, the second season of a hit crime drama from Italy, and a new period drama from Spain. 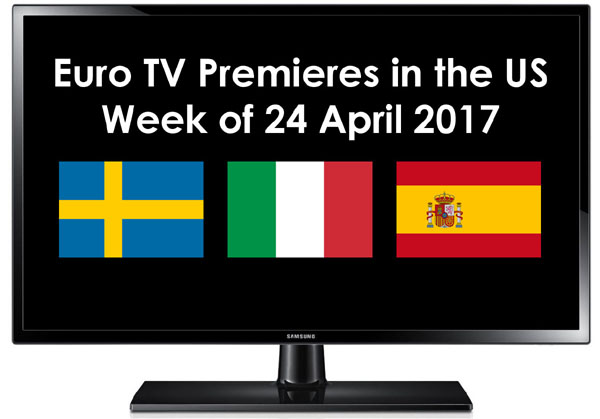 Without any further ado…

Before the Fjällbacka Murders TV series, there were the tele-film adaptations of three novels — The Preacher, The Stonecutter, and The Gallows Bird — by Swedish crime fiction author Camilla Läckberg.

As with their sort-of sequel series, these made-for-TV movies are set in the coastal town of Fjällbacka, but in the years prior to those of Fjällbacka Murders. They also feature a different lead cast. Playing Detective Patrik Hedström is Niklas Hjulström, whom you may recall from Annika Bengtzon and two of the Millennium films. Elisabet Carlsson, who appeared in Beck and The Sandhamn Murders, costars as Patrik’s fiancée, crime novelist Erica Falck. As we’ll see, the couple got entangled in complex cases well before they were married.

In The Preacher (Predikanten), a young boy’s discovery of a dead woman’s body results in the police dealing with not just her corpse but the skeletons of two other women who went missing in the 1970s, as well. Niklas’s father, Lennart Hjulström (Beck, Medicine Man), guest stars as the titular character. Also featuring in The Preacher are Göran Ragnerstam (Jordskott) and Stina Rautelin (Beck).

The Stonecutter (Stenhuggaren) finds Patrik and Erika involved in the case of a dead seven-year-old girl, initially presumed to have drowned by accident. That is, until the autopsy reveals she was murdered. Appearing in this two-parter are Björn Bengtsson (30 Degrees in February), Anja Lundkvist (Verdict Revised), and Dag Malmberg (The Bridge).

And in the two-part The Stranger (Olycksfågeln, based on the English-language book translation titled The Gallows Bird), Lia Boysen (The Inspector and the Sea) guest stars as Hanna Kruse, a new colleague for Patrik at the police force. A fatal car crash happens on the same day that Hanna arrives at the station, only the supposed drunken driver didn’t die in the accident but was murdered.

If you haven’t watched the first season of this intense mafia drama yet, get thee to Amazon Video or Netflix and binge-watch it pronto, because the finale sets up what’s to come in Season 2. (Warning: Some spoilers follow below.)

The game of thrones for the organized crime kingdom of Naples is about as violent as the one in Westeros, except here the families belong to actual criminal organizations investigated by Italian journalist Roberto Saviano, who wrote about them in his non-fiction book Gomorra.

At the center of Season 2 are four men: Pietro Savastano (Fortunato Cerlino, Medici: Masters of Florence), the head of the Savastano clan, who escaped from the police and is now in hiding; Gennaro “Genny” Savastano (Salvatore Esposito, Zeta), Pietro’s son, who’s fighting for both his life and his place in the kingdom after being shot during an ambush; Ciro di Marzio (Marco D’Amore, Love Is All You Need), “the Immortal,” who betrayed the Savastano clan and is now plotting to build his own empire; and Salvatore Conte (Marco Palvetti, The Big Dream), the head of a rival clan who’s building an alliance against the Savastanos.

Also in this battle are Annalisa ‘Scianel’ Magliocca (Cristina Donadio, Chimera), a ruthless dealer and crime boss in her own right; Patrizia (Cristiana Dell’Anna, Third Contact), Don Pietro’s assistant; and all manner of clan soldiers and alliance affiliates who remain loyal (or not) to their respective clans.

Which one of them, if any, will claim the kingdom as his (or hers)? That remains to be seen, as the series has been renewed for two more seasons…

Speaking of renewals, the second season of this period drama was commissioned before the first has even debuted.

Set in 1928 Madrid, Season 1 follows four young women who land jobs as switchboard operators at the headquarters of the national telephone company, the only place that represents progress and modernity for women at the time.