Currently in the works is an American version of the hit Norwegian crime drama Eyewitness. So before the remake hits cable, check out the binge-worthy original.

For Euro TV fans, it can be quite annoying when non-English-language series from across the Atlantic aren’t available outside of their native countries, but their English-language remakes are. Me, I feel ripped off. Big time.

However, in the case of multiple-awards nominee Eyewitness (Øyevitne), neither I nor you have to feel anything but enthralled and entertained, because the Norwegian series is available on Region 2 DVD (shown in Norwegian with English subtitles) in the US and UK, and it is definitely worth a watch.

Within the first few minutes of the series opener, four men are shot dead in a sand quarry just outside Mysen, a heavily-wooded, rural town in Norway near the Swedish border. Their killer: a buff man clad only in his skivvies. 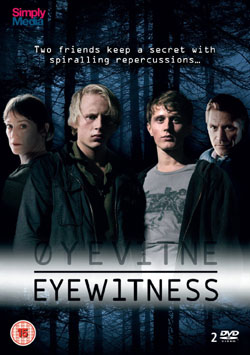 Witnessing the quick and violent deaths are teens Philip (Axel Bøyum, Black Widows) and Henning (Odin Waage, Maria), who, upon realizing their mutual attraction, were (ahem) getting better acquainted inside the shack just yards away from the shooter now heading toward them.

Philip, the lovesick, foster son of Svend (Bjørn Skagestad, Codename Hunter) and Helen Sikkeland (Anneke von der Lippe, Torpedo), and Henning, a talented motocross racer, barely escape. Fearing the worst, they make a pact not to reveal what they saw, lest their lives be in danger and their romance be found out. But keeping both a secret has consequences, for them and others, and their lives will never be the same.

If the six-part story were just about Helen Sikkeland, the sheriff in Mysen, solving the case of the four murders, Eyewitness would probably be just another in a long list of pedestrian crime dramas. What saves it from being amongst the ordinary are the depths of the central characters, the honesty of the interpersonal dramas that punctuate the main storyline, and the narrative itself.

Quadruple murders (hopefully) don’t happen every day in one’s backyard, but teens do fall in love and fall out with their parents and each other. Sons drop everything to take care of their sick mothers. Some parents feel like giving up after enough stuff has hit the fan with their kids. Single, attractive women fall under the spell of handsome, manipulative men. And the ways in which these strands are woven in with the main crime plot compel you to be invested in the characters and their outcomes.

(Note: The trailer contains scenes that are not suitable for all viewers.)

Folks who follow The Euro TV Place know I’m a sucker for a good theme song, and the one for Eyewitness — “Saviour Unknown” — performed by British/Norwegian singer/songwriter Shaun Bartlett, is so haunting and beautiful, I’ll have to add it to my list of best Euro TV theme songs when I update it. (It’s already on my must-listen-to playlist.)

As for the American remake of Eyewitness, Adi Hasak (Shades of Blue) is the writer and showrunner of the ten-episode series for USA Network. Both he and Jarl Emsell Larsen are the executive producers of this Universal Cable Productions project, which is currently in pre-production.