The winner of two prestigious awards, Norwegian historical drama The Heavy Water War has premiered and is now available for streaming in the United States.

Add this excellent miniseries, one of my favorite UK Euro TV premieres of 2015, to your to-watch list. Or start binge-watching it now, because the drama, the winner of the Best TV Drama awards at Prix Italia and Norway’s Golden Screen in 2015, is fabulous.

Based on actual events, The Heavy Water War (Kampen om tungtvannet) is the incredible story of how a group of young Norwegian soldiers risked their lives to foil Nazi Germany’s plans to build and use nuclear weapons against the Allies during World War II. 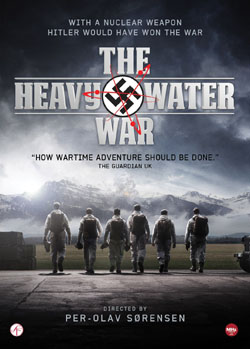 Their strategy: sabotage Germany’s efforts to secure the heavy water necessary to build the nuclear weapons. Their tactic: blow up the only facility in Europe where heavy water is produced, located within an ammonia distillation plant in Vemork, Norway.

After the Nazis begin their occupation of Norway in 1940, Leif Tronstad (Espen Klouman Høiner, Mammon), the Norwegian scientist who pioneered research into heavy water, evades the clutches Germany’s SS by escaping to London, where he serves as an intelligence officer for the Scandinavian branch of Britain’s Special Operations Executive.

Meanwhile, German theoretical physicist and Nobel Prize winner Werner Heisenberg (Christoph Bach, Tatort) has a near-miss with the SS and is summoned by high-ranking Nazi officials to develop their nuclear weapons, forcing him to spend less and less time with his pregnant wife Elisabeth (Peri Baumeister, Blochin – The Living and the Dead) and child.

And (the fictitious) Erik Henriksen (Dennis Storhøi, Nobel), a lawyer for Norsk Hydro’s Vemork factory, gets elevated to the position of Managing Director, which entails moving to Vemork with his wife Ellen (Maibritt Saerens, The Legacy) to ensure that enough heavy water is produced to meet the demands of the Germans, who now occupy the plant.

Tronstad’s efforts do not go off without a hitch, not even after the American military gets involved in Britain’s plans. As the Germans attempt to capture the Norwegian soldiers and locate their resistance collaborators within Norsk Hydro, and as Heisenberg and Henriksen each face mounting pressures to deliver their respective goods, the nail-biting excitement builds. And when mission accomplished seems to be the phrase of the day, the battle continues as the war rages on.

Written by Petter Rosenlund (Codename Hunter) and directed by Per-Olav Sørensen (The Half Brother), the multi-language The Heavy Water War is a co-production of Norway’s Filmkameratene and NRK, Denmark’s Sebasto Film, the UK’s Headline Pictures, and Sweden’s SF Film.

The Heavy Water War, shown in Norwegian, English, German, and Danish, with English subtitles, began streaming yesterday, 1 February 2016, on Netflix US. The series will also be a selection for subscribers to MHz Choice later this year.

Viewers in Britain can stream the series, under the title The Saboteurs, at Amazon Video UK, or download it from iTunes UK.