Dag is back. And life for the marriage counselor gets downright ugly before it gets better in the second season of Dag, the multiple Best TV Drama nominee, now available on DVD.

Relationships aren’t always easy. Depending on one’s context, they can be frightening, more than a tad messy, and/or not worth the bother. Ultimately, “it’s complicated” is a meme for “it’s anything but ideal.”

Even after Cupid’s arrows have pierced the hearts of two individuals, there is still no guarantee of happily ever after. Such is the case of Dag and Eva, played by Golden Screen Norway Best Actor nominee Atle Antonsen (In Order of Disappearance) and Best Actress winner Tuva Novotny (Crimes of Passion).

(Spoilers of sorts follow, if you haven’t seen Season 1.)

Before she was his blind date #19, he wholly believed “compatible personalities do not exist” and recommended (scolded, actually) his marriage counseling clients to break up and live alone if they want to be happy. After Dag and Eva fell for each other, he changed his tune slightly… until circumstances prompted a reversion. 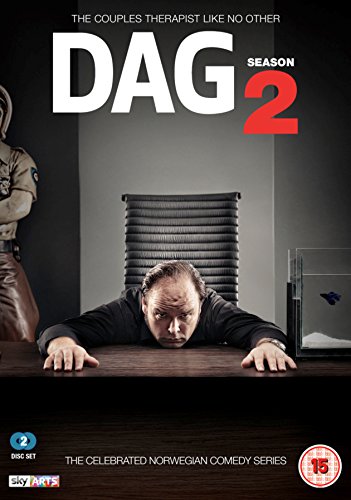 Fast forward to the Season 2 opener, which begins roughly six to nine months after the Season 1 finale. Eva is gone, and Dag is in the pit of despair. His way of coping with his depression: go on the binge-iest of binges — a rapid spiral downward, fueled by booze and Pez-dispensed Valium — which forces his assistant Malin (Agnes Kittelsen, The Half Brother) to do damage control at the office.

Eva is back in Goa, India, only this time she isn’t there to escape an unhappy life in Norway or to explore her sexual fantasies. Rather, she’s on a mission: to learn who is her son’s baby-daddy.

His sexcapades aside, Benedikt sees the sad, bad state Dag is in, and brings him to a detox facility run by his stepfather, Ernst — a non-traditional, out-there therapist played by none other than Rolf Lassgård (Sebastian Bergman, Death of a Pilgrim, Wallander movies).

Staying clean and sober is challenging for Dag, both in and out of rehab, what with a damning patient now living next door and stalker Trine (Kaia Varjord, Hjem) hovering too close for comfort. But then Eva reappears, and Dag has a new lease on life. Until…

(This trailer is not suitable for those easily offended or for younger viewers.)

While the comedy and drama are more evenly mixed in the first season of Dag, the second is decidedly more dramatic, punctuated by moments of comic relief (and far fewer of the darkly humorous existential interstitials).

And two actors who begin recurring roles in Dag: Season 2 are Iben Hjejle (Dicte, Klown, Anna Pihl) and Trond Espen Seim (The Legacy, Varg Veum, Dirty Money, White Lies). Hjejle plays Juanita, someone from Eva’s past, and Seim plays himself in one of the most hilarious secondary arcs of the series.

Season 2 of Dag is likely to make my list of Euro TV favorites this year, as Season 1 did last year. Its characters are quirky and certain plot devices are zany, yet all are recognizable and relatable in some way, shape, or form. That’s the thing about Dag: it’s real — messy, ugly, sad, funny, bittersweet, hopeful — without being in your face about it. In a word, it’s brilliant.