Euro TV fans, it is definitely time to get your laugh on, because Season 1 of the hit Norwegian comedy-drama Dag is now on DVD.

When it comes to foreign-language Euro TV shows, our thoughts might turn first to Nordic noir crime dramas and mysteries as well as those from the Continent, as far fewer European comedies and dramedies have screened in the US and UK. Some exceptions are the hilarious German comedy Crime Scene Cleaner, the hit Danish sitcom Klovn, and the worldwide sensation Rita, also from Denmark.

Now we can add to this short but growing list the critically-acclaimed, multiple award-winning, audience-favorite Norwegian comedy-drama Dag, whose first season came out on DVD last week. (The third season is currently screening in the UK on Sky Arts.)

With humor as dark as its Nordic noir cousins, the series revolves around the eponymous Dag Refsnes (Golden Screen, Norway Best Actor award nominee Atle Antonsen, In Order of Disappearance), a misanthropic marriage counselor who believes “compatible personalities do not exist” and espouses living solo. To couples wanting relationship help, he recommends splitting up. (For one married couple in particular, he unequivocably offers divorce as the way to go, as it would “be a mercy killing.”) 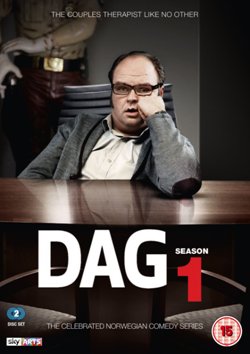 Dag’s misanthropy extends to himself — “someone I despise, yet appreciate more than anyone else I’ve met.” If it weren’t for the fact that he can’t escape his own person as he can others, the lonely loner Dag would likely forego his own company.

And it is in his inner sanctum, a double-locked-and-chained man-cave, where Dag practices what he preaches by retreating alone to his leather recliner, accompanied only by beer and whiskey, music from his 6000-album collection, and when needs must a bit of Valium from one of his many Pez dispensers.

No one is allowed inside Dag’s flat. The furthest anyone gets is the foyer, including his sister Marianne (Silje Torp, Lilyhammer), a divorced mum of a teen-aged son who sets up Dag on many a blind date out of a belief that he needs a girlfriend, and his best friend Benedikt (multi-award winner Anders Baasmo Christiansen, Arn: The Knight Templar, who bears a striking resemblance to British actor James Corden), an irrepressible sexoholic wanted dead by the brothers of his Serbian girlfriend Mia (Ine F. Jansen, Good Night, Darling), now an ex, as Benedikt broke up with her just as she was about to give birth to their son.

Work-wise, Dag sees all sorts, from a gay couple with role-play problems, to a nun. When his words of advice seem not to suffice, he resorts to quotes from famous persons, displayed on the wall behind his desk and lit for maximum effect just before he ends a session. For all else, he has his assistant Malin (Amanda Awards winner Agnes Kittelsen, Max Manus), who serves espresso with a smile, helps herself to whiskey from the dispenser in Dag’s office, and eavesdrops on his sessions for fodder for her novel.

Then one evening, on yet another blind date, Dag meets Eva (multiple award winner Tuva Novotny, Crimes of Passion, who also directs several episodes), an old friend of Marianne who returns to Norway (with the self-censoring reflex of throwing up when she lies) after having run away to Goa, India, a decade earlier. Unlike his previous eighteen blind dates, there’s something about her. Not only does Dag allow Eva into his flat (eventually), he lets her stay there when plumbing problems displace her from hers. And Dag and his life start to change. Whether or not he sees this as for the better, we shall see.

Although episodes are (relatively) self-contained, each one builds on the next through the arcs, from Dag’s relationship with Eva and his ongoing dilemma with one of his counseling couples, to Benedikt’s problems with Mia, thus giving it a serial feel.

Dag also has a structure unlike most other series. Episodes consist not only of the scenes in which the action plays out, but also interstitials, including flashbacks, pithy bits that come complete with visual aids, and voiced-over cutaways that reveal Dag’s existential thoughts.

Season 1 features cameos from several Scandinavian actors you might recognize, including Marit Andreassen (The Half Brother), Gard B. Eidsvold (Good Night, Darling), Rebecka Hemse (Beck), Jon Øigarden (Mammon), and Jan Sælid (Codename Hunter). And it has a kicking soundtrack.

Written by the Golden Screen, Norway award-winning duo of Øystein Karlsen (Lilyhammer) and Kristopher Schau, Dag is filled with some of the best dialogue I have ever heard. The series is by turns utterly hilarious (Dag’s laugh-out-loud zingers and Benedikt’s sexscapades and dance number are noteworthy) and deeply touching (particularly in one scene that features a hammock).

(Viewers who are particularly sensitive about certain subjects, such as religion, might not appreciate all of the humor in Dag, so don’t say I didn’t warn you.)

As a whole, though, Dag is one of the most brilliant series to make its way beyond the fjords, and it is definitely a must-watch. With the Season 1 DVD now available (rated TV-15 and shown in Norwegian with English subtitles), the wait is on for the DVDs of Seasons 2 and 3.