MHz has got Euro TV fans covered with its re-broadcasts of several fan favorites in September, including mysteries, crime dramas, and legal dramas. Did I mention Beck? 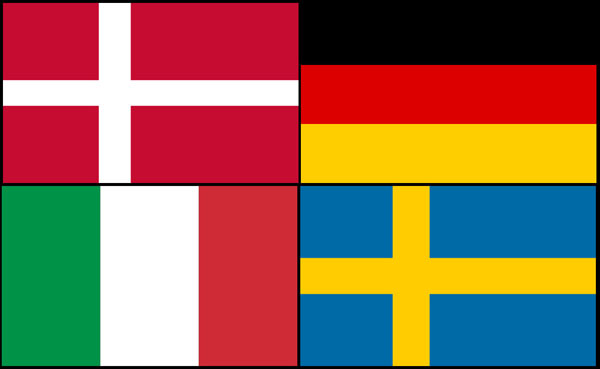 All programs shown below begin airing at 9 PM ET and are rerun at midnight on MHz Woldview and MHz Live. Note that you must register for a free account in order to access the live stream. Some episodes might also be available on MHz’s catch-up page after they air.

This Monday night staple, starring Terence Hill as the eponymous Catholic priest, continues with two new episodes every week in September, starting with the Season 7 finale and moving straight into the premiere of Season 8.

7 September 2015 — In “Don Matteo Stands Accused” the padre lands in jail after being falsely accused of violating his vows, and he might not be exonerated in time to help Marshal Cecchini and Captain Tommasi stop Cecchini’s daughter Patrizia from running off to Spain. “That Was My Daughter” finds Don Matteo investigating the attempted murder of an antiques dealer and taking care of the rebellious and pregnant teenager Laura at the rectory, while the attractive but ruthless prosecutor Andrea Conti arrives at her son’s station.

14 September 2015 — Don Matteo and the police investigate the drug-related death of a girl at a “Rave Party,” while Cecchini tries to prevent Patrizia from spending a romantic weekend alone with Tommasi. In “Proof of Love” the death of a young woman while in labor is followed by the murder of her gynecologist, and Tomassi must choose a coach — Cecchini or Conti — to prepare for a boxing match.

21 September 2015 — A falconer and adoptive father of an autistic boy is stabbed to death in “The Man Who Could Fly,” while a misunderstanding causes Cecchini to believe he isn’t long for this world. In “The Return” Don Matteo investigates the attempted murder of a young woman, while Tomassi tries not to make a bad impression on the young, athletic Spaniards staying at Patrizia’s house.

28 September 2015 — In “Three Grandchildren and a Nanny” the investigation into the discovery of an unidentified body at a mansion reveals the mysterious past of the wealthy family’s nanny, and Cecchini’s mistaken belief that Patrizia is pregnant leads to, what else, misunderstandings. And in “Severino In Love” Cecchini teaches Severino how to win the woman of his dreams, and a young pilgrim is strangled to death.

Crimes of Passion (Maria Lang) (In Swedish with English subtitles)

If a stylish and steamy Swedish whodunit is what you’re looking for, then Crimes of Passion is definitely the show for you. Adapted from the mystery novels by Maria Lang, this Nordic noir “Miss Marple meets Mad Men” series stars the beautiful Tuva Novotny (Eat Pray Love) as literature grad student and amateur sleuth Puck Ekstedt, Linus Wahlgren (Irene Huss) as Puck’s fellow academic and history-buff (and just plain buff) beau Einar “Eje” Bure, and the delicious Ola Rapace (Wallander) as Christer Wijk, Head of the National Homicide Commission in Stockholm and Eje’s best friend (and sore spot when it comes to Puck).

The first five of the series’ six episodes, in which passions and betrayals lead to murders and mayhem in and around the Bergslagen lake region of post-war Sweden, air on consecutive Tuesdays in September, starting on the 1st of the month. You can read the plot details for each episode in this post.

The Spider (Edderkoppen) (In Danish with English subtitles)

Whether the arachnid creeps you out or not, this dark thriller of a miniseries should keep you glued to the screen for its six episodes, which air in two-episode blocks on the 2nd, 9th, ad 16th of September.

Set in 1949 Copenhagen following the Nazi occupation, goods from food to cars are in short supply, but the black market for them is booming, thanks (or no thanks) to the many-armed (and legged) network of criminal syndicates doing shady business to supply them to folks who are willing to pay. Corruption is everywhere, and one young and idealistic newspaper journalist named Bjarne Madsen is eager to expose it. As Bjarne delves into the underbelly of the city’s underworld for his big-break story, he and others around him, including his brother Ole and the attractive diva Lisbeth Gordan, whom both brothers fancy, get caught up in the webs of criminals and conspiracies.

This two-part miniseries closes out Wednesday evenings in September, with its feature-length episodes airing on the 23rd and 30th. Story-wise, it’s less “show me the money” than “follow the money,” which is what the real-life Italian anti-Mafia judge Giovanni Falcone did to expose the intricate and expansive workings of the Mafia in Italy, the US, and across the globe in the 1980s and ’90s, until his assassination in a car bombing in 1992.

Massimo Dapporto (The Family) stars as Giovanni Falcone, with Emilio Solfrizzi (Agata and the Storm) as fellow anti-Mafia judge Paolo Borsellino, and Vincent Riotta (Under the Tuscan Sun) as US Attorney Rudolph Giuliani, who worked with Falcone in cases against the Mafia.

This mystery series, based on the bestselling crime novels by Donna Leon, is one heckuva wanderlust firer-upper for Venice, with its gorgeous piazzas, fabulous food, and everything else Venetian (although the dialogue is in German.) And the first four feature-length episodes take over Thursday evenings on MHz next month, airing on the 3rd, 10th, 17th, and 24th of September.

As for Brunetti’s cases, he has plenty, including ones involving illegal trafficking, double lives, a cold case, and even his wife Paola (Barbara Auer, The Book Thief). You can find details about each of the four episodes in this post.

Euro TV fans the world over can’t get enough of Beck, one of the most popular and long-running series out of Sweden. It’s dark, gritty, and intense, and stars two highly-regarded Swedish actors in two of the most beloved roles on television anywhere: Peter Haber (Enemy’s Enemy) as the straight-and-narrow, by-the-book Detective Martin Beck, and Mikael Persbrandt (Jadotville) as Beck’s hot-headed, politically-incorrect partner Gunvald Larsson.

In “The Decoy Boy” (4 September 2015) the Stockholm police receive a cryptic message following the discovery of two immigrant boys’ dead bodies, and time is running out for Beck and co. to prevent another murder in the seedy world of the child sex trade. “The Man with Icons” (11 September 2015) finds the husband of an elderly murder victim the prime suspect, although he might not be her killer.

“White Nights” (18 September 2015) opens with the killing of a truck driver during a sting operation, a young man who turns out to be Beck’s estranged son, leaving Beck distraught at first, then fired up to nail whoever was responsible for his son being in the wrong place at the wrong time. And in “Serial Killer” (25 September 2015) multiple women who were students together are being murdered one by one, and Beck delves into their darkened pasts to unearth the motive and stop any more killings from happening.

Sometimes it takes something drastic to completely shift one’s perspective, and that is precisely what happens with hot-shot attorney Rocco Tasca (Sebastiano Somma, Hannibal) after he gets his client acquitted in the hit-and-run killing of a boy, and the grieving mum shows up at Rocco’s house to demonstrate what she thinks of the zero justice she got.

Rocked to his core, Rocco quits both his job at a prestigious law firm and his relationship with ambitious girlfriend Alice (Loredana Cannata, A Magnificent Haunting), and devotes himself to being a Robin Hood of the legal world by defending the weak, the poor, the underdogs. The big bucks are gone, but in their place is the kind of fulfillment that money can’t buy. Plus he still has his colleagues, the private eye Virgilio (Stefan Danailov, After the End of the World) and junior lawyer Marta (Elisabetta Gardini, Prigioniere del cuore).

The first four feature-length episodes of A Case of Conscience air on consecutive Saturdays, starting the 5th of September 2015.

In “A Case of Conscience” Rocco refuses to take a case from a once-beautiful and former drug user after the woman’s plastic surgeon cut a facial nerve by mistake. However, Rocco changes his mind when learning more about the medical group. “A Deliberate Accident” finds military academy officials calling an enthusiastic cadet’s fatal fall from a balcony a suicide, and Rocco’s investigation uncovers much that is unsavory amongst the cadets.

Despite the poor odds of winning, Rocco still takes the case of a family whose patriarch and breadwinner died from a plane’s crashing “Like a Ton of Bricks” in the countryside, and he learns just how far corporate big wigs will go to defend themselves and their interests. And in “Blackout” each party in a case — a distraught man, his father’s caretaker, and the power company — has a motive for legal finger-pointing following the death of an elderly man, whose iron lung stopped functioning because of a power outage.

The Octopus (La Piovra) (In Italian with English subtitles)

If memory serves me correctly, it’s been a while since this international blockbuster of a Mafia thriller has been shown on telly. Its title is synonymous with the Mafia in Italy, and all ten seasons of the series have become cult classics. And it all started with the first serial’s six episodes, which air in two-episode blocks on the 6th, 13th, and 20th of September.

In them Michele Placido (Romanzo Criminale) stars as Commissario Corrado Cattani, a detective who moves with his wife and daughter from Milan to a small town in Sicily, where he is the new Chief Inspector following the Mafia hit on his predecessor. Cattani quickly discovers that the Mafia’s tentacles hold people in every echelon of society in their grip, and his battles with the mobsters have devastating consequences, both personally and professionally.

Note that there is no information right now about which program will be shown in the 9 PM time slot on the 27th of September. When information is available, I’ll update this post.