Multiple award winner Jonas Jonasson’s first novel, The 100 Year-Old Man Who Climbed out the Window and Disappeared, was an international bestseller, and the film adaptation was a smash hit at the box office, raking in more than $51 million worldwide to become the highest-grossing Swedish film ever.

Now Jonasson’s follow-up novel — The Girl Who Saved the King of Sweden (Analfabeten som kunde räkna, translation: The Illiterate Who Could Count) — is to be adapted for the big screen by Primetime Emmy® Awards and Nordic Council nominee Joni Sighvatsson (Valhalla Rising, The Weight of Water, Arlington Road), who executive produced director Felix Herngren’s film version of The 100 Year Old Man. 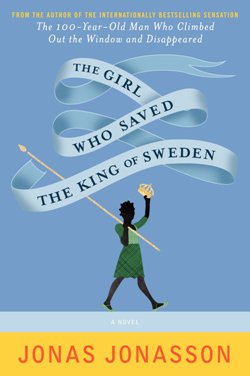 In an interview with Nordisk Film & TV Fond, Sighvatsson said, “Obviously after The 100 Year-Old Man… I was a big fan of Jonas’ writing, so I anxiously read Analfabeten and just loved it. There were many bidders, but after long discussions, I ended up getting the rights.

“This is a very different story than The 100 year-Old Man, but of course it has Jonas’ unique style, and in some ways I think it allows for an easier film adaptation.”

The story of The Girl Who Saved the King of Sweden is “a wild romp” about a young South African girl who makes her way out of Soweto and into Sweden, where she gets embroiled in international politics.

Sighvatsson added, “Tele München in Germany [Night Train to Lisbon] is my partner on this. They had come in early on The 100 Year-Old Man and taken a lot of risk, and of course ended up doing very well. We are finalizing negotiations with a writer right now. Filming will be partially in English as the lead character is South African.”

According to Nordisk, Sighvatsson is actively looking for Scandinavian original or literary adaptations for the international market. In addition to The Girl Who Saved the King of Sweden, he has acquired the film rights to the Icelandic novel I Remember You (Ég man þig), penned by the award-winning crime author Yrsa Sigurðardóttir. This Iceland-set thriller will be directed by Óskar Thór Axelsson (Trapped, Black’s Game) for Zik Zak Filmworks.