Not every Swedish crime drama is of the noir variety, so if you’re looking for shades of Wallander or The Bridge in the mystery series Crimes of Passion, you won’t find them. What you get, though, is a good old-fashioned stylish and sexy whodunit.

Some have referred to Crimes of Passion

as being “Mad Men meets The Killing.” Um, no. Others have billed it as “Marple meets Mad Men.” That’s more like it. Aside from the Swedish language, the mystery series has little to nothing in common with the crime serial. However, its period setting, sleek style, colorful costumes, and depiction of social mores are quite reminiscent of the American drama, while its small-town characters, quaint rural backdrops, intricate storylines, and “big reveals” could be straight out of Agatha Christie’s English novels.

(pen name of Dagmar Lange), and are set during the 1950s in and around the Bergslagen lake region of post-war Sweden, where alcohol flows freely, cigarette smoke billows, men wear crisp suits and fedoras, and colorfully-clad women become homemakers after marriage.

Crimes of Passion stars Tuva Novotny (Dag, Eat Pray Love) as Puck Ekstedt, a graduate student in literature whose passion for crime fiction, knack for snooping, and habit of being in the wrong place at the wrong time puts her in the midst of murder and mayhem every time. Linus Wahlgren (Irene Huss, Rederiet) costars as fellow academic and medieval history buff Einar Bure, known affectionately as Eje, whose love of Puck is strong but not untested, especially when it comes to his best friend Christer Wijk, the  Head of the National Homicide Commission in Stockholm and a ladies’ man bar none, played deliciously by Ola Rapace (Wallander, Skyfall).

We meet the three in “Death of a Loved One” (“Mördaren Ljuger Inte Ensam“), a tale that evokes Christie’s And Then There Were None. Puck attends her tutor’s midsummer holiday gathering, where she and Einar get further acquainted. But their fun and flirting are interrupted when she finds the dead body of a another guest. The partygoers are the only people on the island, so one of them must be the killer, but who? With no phones at the secluded cottage, Einar takes the motorboat to get Christer. Things get curiouser and curiouser when the body has vanished, someone else is killed, the boat is set adrift and leaves everyone stranded, and another of the “ten little Indians” has commited suicide.

The engaged Puck and Eje, as well as Christer, are in the best friends’ hometown of Skoga for a wedding in “King Lily of the Valley” (“Kung Liljekonvalje Av Dungen“). The bride doesn’t show, and speculation that cold feet made her a runaway bride gets tossed when Christer and Puck discover her corpse, complete with the bouquet of flowers she was to have walked down the aisle with. While her parents grieve, the former groom-to-be seems unphased, and others that Christer questions try to keep their secrets hidden. But after Puck follows a hunch and finds another dead body, Christer finally outs the killer.

Christer investigates the murder of a woman in Stockholm, while newlyweds Puck and Eje, along with her Egyptologist father’s cat, Thotmes the Third, holiday in Skoga at Eje’s sister’s house in “No More Murders” (“Inte Flera Mord“). Their idyll comes to an abrupt halt when Thotmes leads Eje to the body of a young man, found stabbed in the garden. It turns out the two killings are connected, but no one questioned by Christer is giving up their secrets. Then Puck finds a clue, Thotmes nearly becomes another victim, and a suspects goes missing, and little by little, various truths and the murderer are revealed.

In “Roses, Kisses and Death” (“Rosor, Kyssar Och Döden“), Puck and Eje arrive at the Rödbergshyttan estate for Christer and Gabriella’s engagement party, right before local police show up to investigate the discovery of a skeleton buried in the cellar. The victim had ties to the local gypsy who dug up the bones and to Gabriella’s family, so when Puck finds the grandfather dead in his bed soon after she and Eje had witnessed his new will, family members and the gypsy are suspects, as each had something to gain from his death. Another murder adds a twist to the case, and as Christer continues his investigation, (figurative) skeletons begin falling out and Christer’s life is forever changed.

Andreas Hallman’s home can bring on “Dangerous Dreams” (“Farliga Drömmar“) for those who stay there, including Puck, who has been hired by the eccentric author as a live-in secretary to take notes for his next novel. When the eldest son dies, both the family and family doctor attribute his death to his congenital heart defect, but Puck thinks it was murder. Spooked by the event and what might have been a nightmare (or not), she calls Eje and tries to leave, but Hallman won’t let her, not until Christer shows up unexpectedly. When another member of the isolated family becomes a victim of a murder most foul, the detective must find out who amongst the oppressed household, including the doctor, wanted the person… and Puck… dead.

And in “Tragedy in a Country Churchyard” (“Tragedi På En Lantkyrkogård“), Puck and Eje are spending the Christmas holiday with her father, niece Lotta, and uncle at the latter’s vicarage. The festivities are shattered, though, after the general store owner’s wife shows up in a panic to see if her husband is with them, and Puck and Lotta find his bloodied body. Enter Christer, whose investigation uncovers the couple’s secrets and enemies, and pushes the murderer to kill a second time and attempt a third. 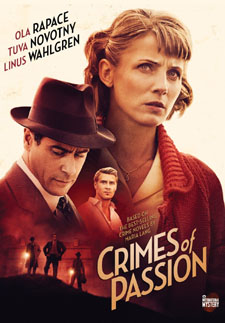 is a classic whodunit series, complete with corpses, dysfunctional families, dubious affairs, real clues and red herrings, and plenty of suspects with opportunities and motives — from jealousy and revenge, to unrequited love and forbidden romance — to commit murder. (A few plot holes here and there notwithstanding.)

While the mystery storylines are self-contained in each episode, the relationships between the lead characters arc across the entire series. Sure, Puck and Einar love each other, and Christer knows it, but the chemistry between him and Puck has an energy all its own, and Einar feels it, especially since he also knows Christer to be a womanizer.

So suspicions don’t just abound in the realm of the murder suspects, and herein lies much of what makes Crimes of Passion a seductive watch. As Puck and Eje deepen and grow their relationship, tensions also arise between them. So, too, does the sexual tension between the professional detective and amateur sleuth. Can Eje trust his girlfriend/fiancée/wife and best friend? Can Puck and Christer trust themselves? Will they maintain restraint, or will longing override loyalty? Ya gotta watch to find out.

Crimes of Passion premiered in the UK on BBC Four this past Saturday. If you missed the first episode, you can stream it with BBC iPlayer until Episode 2 airs this Saturday, 6 September 2014, at 9 PM BST. All episodes are in Swedish with English substitles.

MHz Networks debuted the series in the US in February 2014, so it might be a while before they re-air it. Until they do, stateside viewers can watch the entire series with the three-DVD set,

which also includes English subtitles for the Swedish dialogue.