Another series from Denmark has landed in the US for Euro TV fans to binge-watch: Dicte, the mystery/crime drama nominated for five awards at the 2014 Robert Festival.

isn’t the only sleuthing Scandinavian crime reporter on telly in the US now. Dicte Svendsen is another, only she’s Danish.

(who created the TV series Those Who Kill).

The stories, which unfold over two hour-long episodes each, are faster paced and lighter in tone, but not necessarily in subject matter, than many Nordic noir series. Like them, though, the focus is squarely on character development.

At the age of 16, Dicte ran away from home after her Jehovah’s Witness parents forced her to give up her newborn son for adoption. Fast forward 24 years: Dicte, still carrying that “empty feeling in [her] belly,” has come home to Aarhus from Copenhagen to start life anew with her teenaged daughter, Rose (Emilie Kruse), following her divorce from the philandering Torsten (Lars Ranthe, Sommer).

She’s wounded, yes, but not damaged, and Dicte is thrilled to bits to be hanging out again with long-time friends Anne Skov Larsen (Lærke Winther, Those Who Kill), a single midwife, and the married but still childless Ida Marie Svensson (Lene Maria Christensen, Lulu & Leon). On the work front, Dicte is the lead crime reporter for Dagbladet, a local newspaper where she works alongside photographer Bo Skytte (Dar Salim, Borgen), whose marriage gets rockier when his wife suspects an affair between him and Dicte.

Dicte has a knack for getting herself embroiled in situations on and off the job, including criminal investigations led by the divorced and socially-awkward detective, John Wagner (Lars Brygmann, Unit One), and his young work-by-day/party-by-night partner, Linda Bendtsen (Sjit Happens). Neither takes kindly to Dicte’s meddling initially, but she and Wagner do develop a more collaborative working relationship after a rather prickly start.

Each of the five two-part stories in Series 1 involve children in some way. In “Personal” (“Personskade“), Dicte discovers the body of a young Bosnian woman who bled to death after a C-section and whose newborn baby is missing. “Deductible” (“Selvrisiko”) centers on the murders of women who were deemed bad mothers, after Dicte finds a traumatized young boy and the dead, lifeless body of her neighbor’s sister in the house next door. 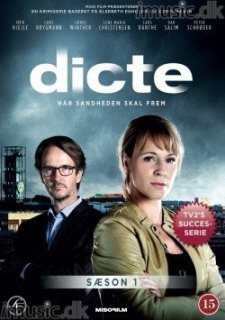 In “Hidden Effects” (“Skjulte Fejl og Mangler”), Dicte believes the dead infant she finds in a tub floating in the canal is somehow related to the kidnapping of Ida Marie’s newborn son, while in “Life and Body” (“Liv og Legeme”), she gets involved in the investigation of a young man’s murder after a prison inmate contacts her with information and later reveals a fact that leaves her gobsmacked. And in “Violence and Power” (“Vold og Magt”), a bomb blast leaves Dicte shaken but unhurt, a young woman dead, and someone close to Dicte the prime suspect.

The storylines in Dicte are compelling, but plots do unfold with varying degrees of plausibility. It is unlikely that a detective would involve a reporter in investigations to the extent that Wagner does with Dicte. Ditto that a journalist would endanger herself on as many occasions and ferret out as many clues as Dicte does.

But those flaws are rendered insignificant by the engrossing stories, engaging characters, and fine acting. Iben Hjejle is especially brilliant as Dicte, playing her with just the right measures of strength, vulnerability, and humanity to leave you sympathizing with her struggles, forgiving her follies, and wanting her in your inner circle of friends.

The first series of Dicte

is currently streaming on Netflix in Danish with English subtitles. Fingers crossed that the SVoD service will also bring the second series, currently airing on TV2 in Denmark, to the US in the new year.