Mark your calendars, Euro TV fans in the US and Canada. MHz Choice has an incredible list of titles from Europe and beyond headed our way this summer and fall! 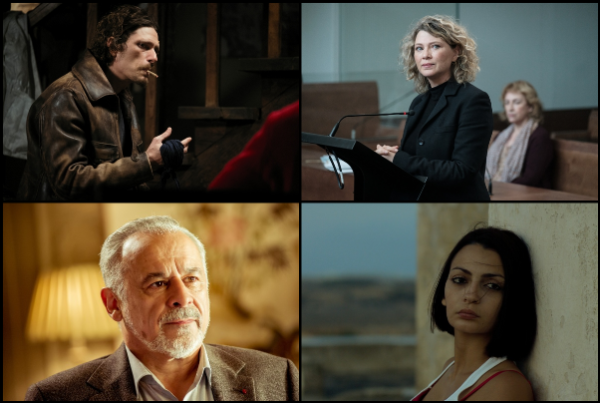 Yowzah! From new series from France, Iceland, Italy and Canada, to new seasons and episodes of fan-favorite shows, to titles from Kazakhstan and Malta, which mark the first series from their countries to be shown in the US and Canada (that we’re aware of), MHz Choice has all of this in store for us during summer and fall 2022. Check out the details below!

All premiere dates shown below are subject to change at any time and without notice.

Peter Haber, Kristofer Hivju (Game of Thrones), and the rest of the regular cast are back for another season of this long-running, fan-favorite Nordic noir mystery-crime drama series. The new season opens with Martin Beck (Haber) returning from sick leave, just in time for him and the team to jump into a new murder case. (Video is from Season 7)

Also returning to our screens this summer is Abdelhafid Metalsi (Spiral) as Captain Kader Cherif, a brilliant, street-savvy detective with the Lyon Crime Squad. Along with his by-the-book partner, Captain Adeline Briard (Carole Bianic, Perfect Murders), hometown boy Cherif delves into and solves murders in France’s third-largest city. (Video is from Season 3)

Season 4 of Cherif premieres Tuesday, June 7, followed by Season 5 on July 12 and Season 6 on August 16.

This French-Canadian fantasy thriller centers on three generations of mysteriously gifted women, who can harness the powers of telepathy, healing, and seduction — although some can be more reckless than others. However, tragic events of the past impede their attempts to blend into the small town they left years earlier, and mistakes are made as love triangles and dangerous pursuits amp up the suspense of each episode.

Cécile Bois (Candice Renoir) stars in this French re-imagining of the BBC’s hit Welsh thriller Keeping Faith, playing Gloria Meyers, a lawyer and mother of three who runs a law practice with her husband, David (Michaël Cohen, The Passenger). While Gloria is home on maternity leave, David suddenly goes missing, forcing her to pick up the chaotic and dangerous pieces left in the wake of his disappearance. As Gloria forges ahead to find her husband, distrust and shocking revelations spread through their family and the neighbors, as well as the police.

The long-awaited return of this intense crime thriller is almost here, but there’s time to catch up on Seasons 1-3 and the serialized story of lead character Sonja before Season 4 arrives. The series stars Alexandra Rapaport (The Sandhamn Murders) as Sonja, a suburban mom pulled into the criminal underworld to pay off her murdered husband’s debts. (Video is from Season 3)

One of the few Euro TV mystery series that is rated TV-G and not made specifically for younger viewers is this fan-favorite show starring Terence Hill as Don Matteo, an ordinary Catholic priest with an extraordinary ability to read people and solve crimes. (Video is from Season 9)

In this acclaimed film noir — the first series from Kazakhstan to premiere on MHz Choice — a series of murders exposes deep corruption in a tight-knit Kazakh community. The episodes center around police officer Bekzat (Daniar Alshinov, Infiniti) and his determination to find the true killer of a boy found murdered in a remote village.

This delightful mystery drama returns with two new feature-length episodes starring Julie Depardieu (Captain Marleau) as Alexandra Ehle, the brilliant coroner at the Bordeaux Forensic Institute. Gruff yet fanciful and free-thinking, she weaves together the crime with the victim’s story as she paints a full picture of not only what happened, but why — ultimately restoring dignity to the dead and giving them justice. (Video is from Season 1)

Based on the best-selling novels by Maurizio de Giovanni, this mystery series follow a ragtag team of misfit detectives investigating and solving crimes in Naples. (Video is from Season 2)

This heartwarming French comedy-drama is about three very different families in Paris. At first glance, the parents seem to have nothing in common. But when their children become friends at school, it becomes apparent that the adults all share the same desire to be loving parents, and can turn to each other when life’s unexpected twists catch them off-guard.

Sara Dögg Ásgeirsdóttir (Stella Blómkvist, Cover Story) stars in this drama as Kristin, a divorced ER doctor who moves back to her home village and faces the ghosts of her past.

Based on real events, this limited series drama is the first show from Malta to be shown on MHz Choice. In it, jealousy, poverty, and the hidden edges of Maltese society lay the groundwork for a modern re-telling of a murder that occurred over a century ago.

Set in 1978, this sci-fi comedy series follows Didier Mathure (Melvil Poupaud, Laurence Anyways), a brilliant space engineer who is transferred to lead a specialized UFO investigation team, whose members actually seem to be living on another planet. While their mission is to find scientific explanations for the appearances of flying saucers, Mathure’s mission is to get out of this nuthouse as fast as possible! But an extraordinary event will upset his certainties and open the doors to a world where nothing is impossible…

Set in Paris, France, in 1899, this sweeping period crime drama weaves the Dreyfus Affair and the growing antisemitism in France into the backdrop of the story, which follows the police investigation into the murder of an unknown woman found in the Seine. A young ambitious inspector ends up investigating more than a murder as he uncovers state secrets and corruption.

This Swiss-German-language mystery-crime drama series returns with Sarah Spale (Night Train to Lisbon) as Swiss cop Rosa Wilder. After the intense and personal investigation in Season 1, Wilder jumps right into a triple murder in a small village. She hasn’t totally escaped her family’s past, as the repercussions from the previous season crop up at the most inconvenient times. (Video is from Season 1)

From the producers of Detective Montalbano comes this new series of captivating mysteries, based on the bestselling novels by Gaetano Savatteri. Claudio Gioè (Mafia Only Kills in Summer, Anti-Mafia Squad) stars as Saverio Lamanna, a former press officer who returns to his family home in Makari, Sicily, to write a book. There, based on his incredible ability to investigate people’s hearts and histories, he becomes involved in love and intrigue — revealing all their secrets, crimes and faults…

The made-for-TV movies Magellan et Mongeville and Mongeville et Magellan: Un Amour de Jeunesse spawned two mystery-crime drama series, both of which have gone on to become fan favorites. One is Magellan, which stars Jacques Spiesser as Inspector Simon Magellan; the other is this one starring Francis Perrin, who reprises his role as former investigating judge Antoine Mongeville. Similar to the telefilms, this series sees Mongeville teaming up with a no-nonsense police detective to solve tricky mysteries in Bordeaux.

Set in 1980s France, this comedy series follows three students — Stéphanie (Noémie Schmidt, The Break), Simon (Arthur Mazet, Perfect Murders), and Tony (Paul Scarfoglio, Skam France) — who find themselves short on cash but full of visionary knowledge about how to use new messaging technology. With comic trial and error, they start a sex-chat telephone service and unknowingly create the first social network in history!

Matteo Martari (The Bastards of Pizzofalcone) stars in this crime drama as Marco Buratti, aka the Alligator — a former blues singer unjustly sentenced to seven years in prison. Although he lost his voice behind bars, he acquired the knowledge and skills to become a crack investigator…

In the new season of this crime drama, former police officer Erik Bäckstrom (Rolf Lassgård, Death of a Pilgrim, Wallander) finds himself going back to a case from 15 years ago. New revelations make Erik and the other policeman involved question whether they found the right suspect. (Video is from Season 1)

All of the above titles will premiere in the US and Canada exclusively on MHz Choice via the MHz Choice website, the streamer’s Android, iOS and other apps, and on its digital channels, including MHz Choice on Amazon Channels.