Topic has released the trailer for the second season of Pagan Peak, the über-dark German-Austrian crime thriller. Check it out. 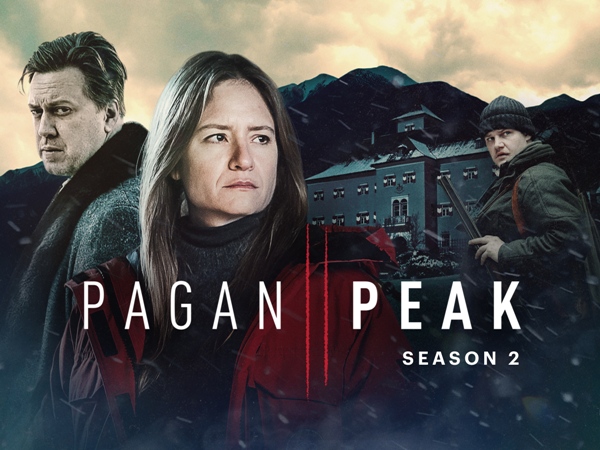 We’re less than a week away from the US and Canadian premiere of Season 2 of Pagan Peak (Der Pass), which brings back Julia Jentsch (The Vanishing, Hannah Arendt) and Nicholas Ofczarek (Dark Woods, The Team) as German detective Ellie Stocker and Austrian investigator Gedeon Winter, respectively.

Given the events in Season 1, these two cops, former cross-border partners during the “Krampus” case, are much worse for wear when we see them again in the new season. Ellie is forced to take a break from active police duty, as she continues to struggle from the trauma, while Gedeon is in a coma following the attempt on his life. But a new case will reunite them.

When the dead body of a woman, identified as a German national, is found propped up like a hunting trophy in a forest near Salzburg, the police fear there could be another serial killer in the border region between Germany and Austria. With Ellie sidelined, her young colleague, junior officer Yela Antic (Franziska Von Harsdorf, Tatort), is assigned to the case, but Yela’s inexperience makes her unable to handle it on her own, especially after there is another victim. Enter Ellie and Gedeon, who team up once again and work alongside Yela on this troubling case — during which the two start to see each other in a way they hadn’t imagined: as potential adversaries.

Pagan Peak: Season 2, a Topic Original, premieres in the US and Canada with its first three episodes on Thursday, May 12, exclusively on Topic and its digital channels, including Topic on Amazon. New episodes will debut singly each week through June 16.