A lot of folks in the US are in deep-freeze zones right now, but whether you are or aren’t, there’s plenty of Euro TV in February for indoor viewing — with or without the heat blasting. 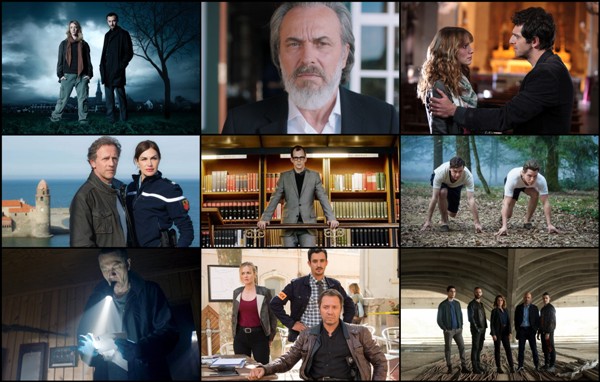 To see the complete list of Euro TV shows available in the US and UK, see the Euro TV Shows by Language section. Viewers in the US can check the ongoing updates of titles released throughout each month on the Euro TV Viewing Guide page.

All programs listed below are shown in their original language with English subtitles, except where noted. Trailers may or may not have English subtitles; for those without, you should still be able to get a sense of the story through the visuals and program descriptions.

The new season of this award-winning mystery-crime drama consists of five two-part stories that star Ville Virtanen (Jordskott) as Kari Sorjonen, the lead investigator for the Serious Crime Unit in Lappeenranta, Finland. Plots include a double murder, the discovery of a preserved fetus at a daycare center manager’s home, a shooting at the largest sand castle in the country, the discovery of a dead body that is linked to a missing persons case, and the reopening of an old case after two women disappear.

Gustaf Skarsgård (Vikings, The Fat and the Angry) stars in this three-part drama as John Manneus, a librarian at the National Library of Sweden in Stockholm, whose stealing and selling of valuable books from the collection nets him a small fortune. Meanwhile, three of his co-workers conduct an internal investigation to determine the identity of the thief.

The Library Thief premieres in the US on Tuesday, February 5, exclusively on MHz Choice and the MHz Choice channel on Amazon.

Nemesio ‘Nemo’ Bandeira (José Coronado, Night and Day) is a drug cartel leader and one of the most influential businessmen in Galicia, the latter thanks to his wife’s family’s company. But all his success and power won’t halt his recently-diagnosed Alzheimer’s disease. As Nemo attempts to hide his illness, he begins preparing to select his successor, which stirs things up in the family, big time.

Will he choose one of his biological children — Nina (Giulia Charm, El secreto de Puente Viejo) or Carlos (Àlex Monner, I Know Who You Are) — neither of whom has ever shown any interest in his business, but who are now tripping over each other to prove that s/he is the best person for the job? Or will he go with the most qualified person — his godson, the lawyer Mario Mendoza (Álex González, X-Men: First Class) — even though he isn’t blood?

It’s summer 2018 in the small village of Musso in the Ardennes, and Yoann Peeters (Yoann Blanc, Station Horizon) finds himself tangled in another disturbing murder case. His former psychiatrist, Jasmina Orban (Jasmina Douieb, Torpedo), asks him for help in proving the innocence of her 27-year-old patient, Dany Bastin (newcomer Aurélien Caeyman). Yoann isn’t a detective anymore, and he promised himself he wouldn’t conduct another investigation… yet he still partners up with Jasmina to get at the truth.

The Break: Season 2, a Netflix Original series, premieres in the US on Saturday, February 9, exclusively on Netflix.

Bruno Debrandt (Spiral) returns for this, his final season as the sarcastic, irrepressible, wheelchair-bound detective, Police Commissioner Frédéric Caïn. (Julien Baumgartner takes over the role in Season 7, but let’s deal with that when the time comes.)

Anyhoo, there’s a bit of a mess in the Season 6 opener. As the police attempt to arrest Tina (Delphine Théodore, A French Village), gunfire breaks out and an innocent bystander in killed in the chaos. The question is, who fired the fatal shot? Was it Tina or an officer following orders given by Lucie (Julie Delarme, Hors du temps), the new regional crime squad commander? The only witness on the scene is a blind man named Antoine Dupré (Bruno Solo, The Accident), and he seems to have something to hide.

The winner of the 2013 Kristallen award for Best Television Drama and the Audience Award at Séries Mania, this drama depicts the rise and the impact of AIDS in Stockholm’s gay community in the early 1980s. The three episodes — “Love,” “Disease,” and “Death” — are adapted from the books in the acclaimed trilogy by Swedish author Jonas Gardell.

The story features Rasmus (Adam Pålsson, The Bridge), a young gay man from a small town who moves to Stockholm to attend university; Benjamin (Adam Lundgren, Blue Eyes), a homosexual Jehovah’s Witness whose relationship with Rasmus grows while AIDS spreads amongst their friends; and Paul (Simon J. Berger, Modus), a friend of Rasmus and Benjamin.

Florence and Venice are two of Italy’s most famous cities, and they are highlighted in the A Night in… documentary series presented by popular scientist Alberto Angela. By day, these places rich in history and culture are packed with tourists, but at night they are wide open, allowing the program’s viewers to tour these cities and experience their art and history with Alberto Angela as the tour guide.

In “A Night in Venice,” Alberto Angela takes viewers around the lagoon and interviews historians and experts about the ancient city built on 100 small islands. Violin virtuoso Uto Ughi plays in the famous La Fenice opera house and talks about the great music of the world, and Lino Guanciale (Palermo Connection) portrays world-famous adventurer Giacomo Casanova.

A Night in Florence and A Night in Venice premiere in the US on Tuesday, February 12, exclusively on MHz Choice and the MHz Choice channel on Amazon.

Set is the quiet and traditional village of Oldenheim in the Dutch countryside, this 12-part Dutch thriller follows several mysterious disappearances in which people seemingly vanish into thin air, always inexplicably and without witnesses.

The weirdness starts soon after journalist Peggy Jonkers (Noortje Herlaar, The Body Collector) returns home to Oldenheim. Sixteen-year-old Nine disappears one summer evening, leaving only her bicycle. No one knows if she was abducted, ran away, had an accident, or is alive or dead, and a search turns up nothing. Then another Oldenheim local goes missing. And it doesn’t stop there. In the weeks that follow, more people from the village go poof!

Some villagers wonder if a serial killer is at large while others think something supernatural is at work — that the events have a religious significance or are signs of the end of days. Regardless, the normally close-knit community of Oldenheim is held in the grip of paranoia and suspicion, friends and neighbors begin to distrust each other, and tragedy arises in other forms. Throughout it all, Peggy and Detective Sharif Dahmani (Nasrdin Dchar, Deadline) refuse to give up, instead facing their fears in their search for the truth.

The Oldenheim Twelve premieres in the US on Monday, February 18, exclusively on Acorn TV and the Acorn TV channel on Amazon.

The second season of this comedy-drama about an Italian family living in 1970s Palermo picks up where Season 1 left off, with the Giammarresi family deciding to stay in Sicily despite the very real possibility that la Cosa Nostra might (permanently) silence them after the murder of Palermo police chief Boris Giuliano.

The Mafia Only Kills in Summer: Season 2 premieres in the US on Tuesday, February 19, exclusively on MHz Choice and the MHz Choice channel on Amazon.

After meeting at a party, Anna (Noémie Schmidt, The Break, Versailles) navigates a tumultuous relationship with Greg (Grégoire Isvarine, Jeux d’influence). When he moves to Barcelona, she decides to join him but misses her flight… and the plane crashes. In the vertigo of having narrowly escaped death, Anna drifts away from reality and the present, and the rising social tensions, protests, and tragedies in Paris mirror her distress.

Paris Is Us, a Netflix Original film, premieres in the US on Friday, February 22, exclusively on Netflix. (You can add it to your queue now.)

It won’t be long until fans of this fantastic crime thriller, who’ve been waiting for what feels like forever for the second season, can finally watch (read: binge) it.

While the fight for land, money, and power intensifies amongst organized crime members, corrupt politicians, and the Vatican, the unlikely trio of mobster scion Aureliano (Alessandro Borghi, Thou Shalt Not Kill), Romani gang member Spadino (Giacomo Ferrara, Don Matteo), and cop’s son Lele (Eduardo Valdarnini, Arianna) conspire to seize control of Rome’s criminal underworld. Which new alliances will they secure and which new strategies will they implement to achieve control of the Roman coast? We shall see…

Suburra: Season 2, a Netflix Original series, premieres in the US on Friday, February 22, exclusively on Netflix.

New feature-length episodes in this collection of murder mysteries, each one set in a different, picturesque region of France, arrive stateside in February. 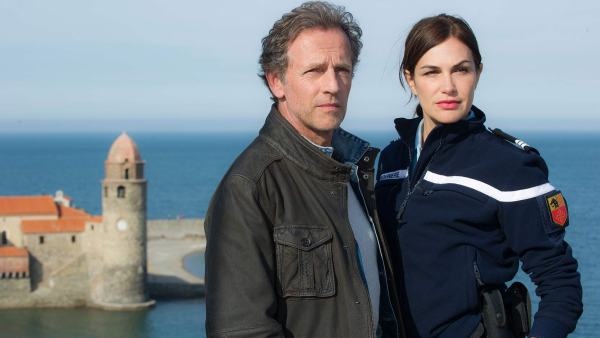 Murder In…: Season 2 premieres in the US on Tuesday, February 26, exclusively on MHz Choice and the MHz Choice channel on Amazon.

This romcom series follows the lives of two families with nothing in common — the colorful and cheerful Neopolitan Gambardellas and the snobby Milanese Trevisols — as an improbable romance sparks between Carlo Gambardella (Giampaolo Morelli, Inspector Coliandro) and Valentina Trevisol (Gaia Bermani Amaral, Un passo dal cielo). He’s a florist and single father of five children, she’s a biologist and the daughter of a magistrate engaged in a trial against a mafia boss; after they’re involved in a minor car accident, they fall in and out of love as they discover more about each other.

Meanwhile, a case of mistaken identity puts Gaetano (Lello Arena, Veleni), Carlo’s father, in prison instead of the city’s most wanted mafia boss (yes, that one). So Gaetano makes the most of it — gaining respect amongst the inmates, leading prison initiatives, and flirting with the warden.

Only You premieres in the US on Tuesday, February 26, at 8:25 PM ET, on Eurochannel.

Based on a true story, this historical drama tells the heartbreaking story of the Kornitzer family. In 1938, amid Hitler’s rise to power and the Nazis’ persecution of Jews, Richard Kornitzer (Ronald Zehrfeld, The Weissensee Saga), a German-Jewish judge, and his Christian wife, Claire (Johanna Wokalek, Pope Joan), send their young son and daughter away from the worsening situation in Berlin to safety in England. Richard escapes to Cuba while Claire stays behind in the Allgäu.

Following the end of World War II, Claire reunites the family in 1947. However, while there is no longer the physical distance, bridging the emotional distance wrought by grief, trauma, and guilt between husband and wife and parents and children is practically impossible. Equally as difficult and devastating is Richard’s search for justice and reparation.

Redemption Road premieres in the US on Tuesday, February 26, exclusively on MHz Choice and the MHz Choice channel on Amazon.

Set in the early 20th century in Herzogenaurach, Bavaria, Germany, the narrative follows the brothers as they transform their father’s shoemaking business into one that manufactures sports shoes. Adi comes up with better and better designs in his quest to create the world’s fastest running shoe, while Rudi uses his talent in sales to secure more and more contracts. The brothers complement each other in business but are radically different as people, and as resentment grows between them, they drift further and further apart.

Costarring Hannah Herzsprung (Dogs of Berlin), Alina Levshin (In the Face of Crime), Rafael Gareisen (Das Boot), and Joachim Król (Commissario Brunetti), Rivals Forever premieres in the US on Tuesday, February 26, exclusively on MHz Choice and the MHz Choice channel on Amazon.

Did you miss any of the new shows and program additions from previous months? Check the Euro TV Viewing Guide 2019 Archives to find out.

For details about the February premieres of shows from the UK, Canada, and Ireland, visit The British TV Place. For those about the debuts of programs from Australia and New Zealand, visit The Down Under TV Place.