La loi de…, one of the most popular drama series in France, returns to the US with another installment featuring an attorney taking on a difficult case.

But before I get into it, a bit of background about the series…

La Loi de… (literally The Law of…) began as a miniseries. 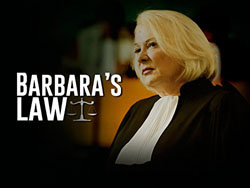 Consisting of three feature-length episodes, Barbara’s Law (La Loi de Barbara) stars César Awards winner Josiane Balasko (French Twist) as Barbara Malo, a partner in the firm of Delandes Malo and Associates. A tough cookie and a demanding boss, she takes on cases that are seemingly open and shut. In the series opener, “The Ideal Culprit,” she defends Olivier Landry (Joseph Malerba, Braquo), accused of killing his wife’s lover. He had already beaten up the guy, but swears his battered and bloodied neighbor was still alive when he left him by the pool, where the victim drowned.

“Word for Word” finds Barbara defending media magnate and wannabe politician Pierre Consigny (Dominique Guillo, The Heavy Water War) against a charge of rape brought by his young and attractive communications manager, Carole (Carole Brana, Duel au Soleil). And in “Illegitimate Defense,” Barbara’s client is Nadège Langevin (Natacha Lindinger, Hard), a married woman who tells police she killed her lover at the disco where they rendezvoused.

Due to the success of Barbara’s Law, France 3 commissioned a follow-up miniseries, but Balasko opted out of it. Opting in: César Awards nominee Gérard Jugnot (The Chorus) for Alexandre’s Law (La Loi d’Alexandre). In it he plays Alexandre Laurent, the half of a brilliant legal team who prefers to stay in the background, that is until his business partner and best friend is murdered in “Like Brothers.” Having never been the lead attorney in court, he fumbles and stumbles in front of the judge, putting his reputation on the line to get to the truth. (This episode guest stars Sara Martins of Détectives and Pigalle, la Nuit, as well as the hit Brit dramedy-mystery series, Death in Paradise.)

Having experienced trial by fire, as it were, as a courtroom defense attorney, Alexandre’s next case is that of Julia (Hande Kodja, The Bureau), a young woman accused of killing her employer in “The Portrait of Her Mother.” The thing is, he’ll have to drop her case if he shares his suspicions: that he is the father she never knew. And in “Love Is not Enough,” Alexandre’s client is Benoît Vauthier (Grégori Derangère, Blood of the Vine), a med school teacher accused of murdering the lover of his wife Eléonore (Clémentine Poidatz, Spin). 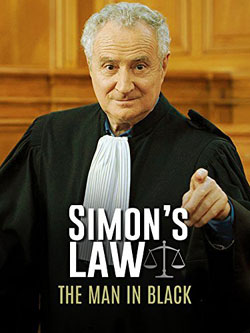 Alexandre’s Law was even more popular with French viewers than its prequel, and more of La Loi de… was commissioned, although not as miniseries. Instead, each made-for-TV movie would have a different actor playing the titular lawyer, starting with César Awards winner Daniel Prévost (The Dinner Game).

He stars in Simon’s Law: Men in Black (La Loi de Simon: Des Hommes en Noir) as Simon Varlet, a cynical and sarcastic but brilliant attorney who excels in his work but not in his personal life. He also doesn’t mince words, so after insulting a colleague and his wife, Simon’s professional punishment is serving as the (not well-paid) public defender for Père Philippe (Nicolas Gob, A French Village). He’s a Catholic priest accused of murdering a dying and repentant parishioner whose wife, Laure (Chloé Stefani, Duel au Soleil), was seemingly in love with him. 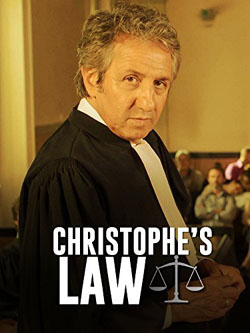 A new episode of La Loi de… began airing in France this month, and at least one more will air on France 3 later this year. Stay tuned for updates about them.

The first eight episodes in the series are currently streaming on Amazon Prime Video. Barbara’s Law and Christophe’s Law are also available on Eurochannel, with Alexandre’s Law likely to be re-aired, as well.