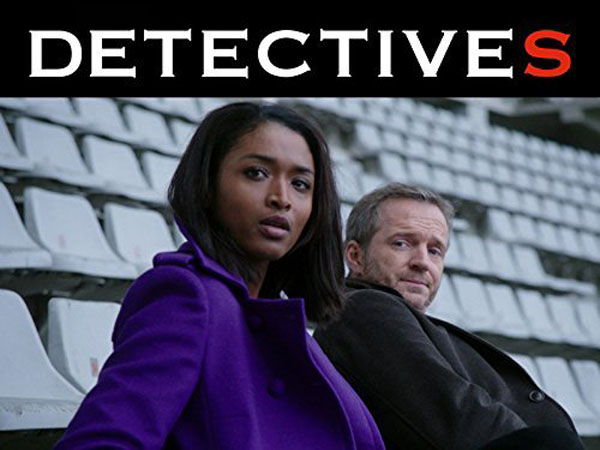 As of yesterday, Détectives is available for practically every stateside Euro TV fan to stream. So if you don’t have a subscription to MHz Choice (yet), you can now watch this delightful, Best Drama award-winning (2014 Festival de la Fiction TV de La Rochelle) French crime dramedy without it.

Leading the cast are Philippe Lefebvre (Marseille, Tell No One) (who bears a resemblance to British actor Rupert-Penry-Jones, at least to my eyes) and Sara Martins (Death in Paradise, Pigalle, la Nuit). He plays Philippe Roche, the son part of the Roche and Son private detective agency, and she plays Nora Abadie, a former intelligence officer who has her own enterprise.

The two become unlikely partners after Philippe’s now-retired father, Maxime (Jean-Luc Bideau, The Churchmen), who founded the family business, brings Nora in to help save the Paris-based company. It’s in dire financial straits, thanks (or no thanks) to the thrill-seeking Philippe, who won’t take a case if it doesn’t enthrall him. Clearly, many haven’t.

Oil, meet water. Unlike Philippe, Nora is all business. Having worked for DGSE, France’s national intelligence agency, she’s a seasoned and disciplined professional who brings a no-nonsense approach to her work. Needless to say, their styles clash, and Philippe and Nora prove to be as challenging to each other as their client cases, his rascally charm and her beauty notwithstanding. Especially their first case, which puts them on opposing sides, since each is representing a different client, who happen to have conflicting interests.

As their work together continues, on cases that involve kidnapping, fraud, corporate espionage, and murder, tensions beyond professional ones (ahem) also arise between the incompatible Philippe and Nora.

Other members of the Roche family get in on the detective action, too, including Philippe’s seemingly rebellious daughter Xenia (Daphné Chollet, Julie Lescaut), Nora’s hapless but sincere assistant Santo (Vincent Escure), and even Maxime, despite his retirement.

A production of Delante TV, the first season of Détectives (eight episodes) is now available for download/streaming (in French with English subtitles) at Amazon Video.