Round 2 of the presidential election in France is on Sunday, making this weekend quite the apropos time to stream Spin. 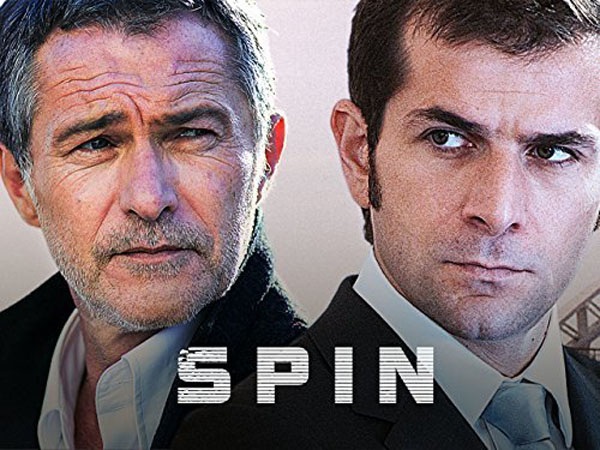 Thankfully, the real-life election in France isn’t a snap one called after the President of France is severely injured in a bombing during a visit with laid-off factory workers, as happens in the series opener of Spin (Les hommes de l’ombre).

President Pierre Desportes isn’t even dead (yet), but Prime Minister Philippe Deleuvre (Philippe Magnan, Spiral, Farewell) is already putting together his team and campaign for succeeding Desportes at the Élysée Palace. The man he wants to be his communications advisor is Simon Kapita (Bruno Wolkowitch, C.I.D., The Tourist), a close friend of and former advisor to the President.

Kapita despises Deleuvre, so not only does he decline the offer, he sets out to find a candidate capable of beating his archenemy in the election. That candidate is Anne Visage (Nathalie Baye, Juste la fin du monde, Le petit lieutenant), the Secretary of State for Social Affairs.

Meanwhile, Deleuvre doesn’t let Kapita’s no stop him and instead hires Simon’s protégé, Ludovic Desmeuze (Grégory Fitoussi, Spiral, Mr. Selfridge), who jumps at the opportunity in order to rise to and secure his place at the top of his profession, loyalty be damned. Ethics, too, since Ludovic learns from Simon, during the latter’s fit of rage about the former’s betrayal, that Deleuvre is covering up the real reason behind the bombing.

Speaking of betrayal, Ludovic’s dismissive attitude toward his no-tell lover, Valentine (Clémentine Poidatz, Mars, Nicolas Le Floch), the best political copywriter in Paris, has her switching over to Simon’s side. Only Simon doesn’t know about her affair with his backstabbing former friend…

And speaking of the cover-up, Appoline (Valérie Karsenti, Maison Close, Résistance), a journalist and Simon’s on-again/off-again wife, is working like the dickens to expose it, but Deleuvre uses his power to try to put a stop to it.

Then a scandal about Visage’s personal and political life makes headlines, and her candidacy is about to implode… until a photo-op strategy turns the tables and it’s “One-nil to Kapita.” (Hah!)

Now the high-stakes game between bitter opponents Simon and Ludovic is really on. As Simon tells his team, “The enemy will play dirty.” Man, do they ever.