Oh là là. The sex workers of the Paradise cannot catch a break, as new dramas put their livelihoods and lives at stake in the second season of Maison Close. Bienvenue au Paradis.

Fast forward two years, and things look like they could get much worse for the women before (or if) they get better, both within and without the Paradise. The return of the Moral Order under France’s Third Republic has Royalist police commissioner Chief Superintendent Torcy (Sébastian Libessart, Détectives) working tirelessly for the cause. One of his primary targets: the luxury bordello of the Paradise.

The Season 2 opener finds the women running the Paradise as a collective. However, managing the place as a business is quite different from earning a wage as a worker, and the money required to maintain the establishment is sorely lacking. And having Torcy on their backs (not literally) is making things that much harder for them.

Enter Louis Mosca (Michaël Cohen, Le Passager), a self-described property developer who flaunts his cash at the Paradise as a sign of more to come. He makes an offer that the ladies can, but don’t, refuse.

What they don’t realize (yet) is that Mosca and his henchmen, Kertel (Michaël Abiteboul, Nicolas Le Floch) and Bak (Martin Loizillon, Un village français), are ruthless criminals.

Mosca wants the Paradise as the headquarters for his gang of thugs and their illegal dealings, all while keeping the running of the place seemingly aboveboard for Torcy’s sake.

Meanwhile, the guilt-ridden Véra is caring for her daughter Jeanne (Lubna Gourion, Plus belle la vie), still under the guise of being her aunt, Hortense is bristling under Mosca’s management of her brothel, and Marguerite is thrilled not to be under Hortense’s thumb anymore. As for Rose, she’s back at the Paradise after a stint in prison, and Mosca has taken a shine to her.

With Torcy’s fanaticism about the Moral Order unabated, he tries to put the squeeze on Mosca by sending his flunky, Commissioner Angélus (Jean-Marie Frin, Of Gods and Men), to the Paradise to dig up some dirt on the flamboyant pimp. When that doesn’t work, Torcy resorts to blackmail. (Some moral order, right?) But what Torcy fails to realize is that Mosca will go to great and brutal lengths to protect his interests.

The plot thickens following the murder of one of Mosca’s competitors, the unwanted arrival of “the Butcher” at the Paradise, and the mounting pressure on Torcy to clean up and restore order to the streets of Paris, which are becoming increasingly overrun by prostitutes and turf wars between pimps. Add in more deaths, plus hostages, as well as drugs, diseases, and betrayals, and life for the ladies of the Paradise becomes more akin to a living hell.

As with the first season of Maison Close, the second is gorgeous to look at, from the beauty of the actors, to the costumes. Likewise, the music is used to brilliant effect, and the sex scenes (some raunchier than others) are once again used as plot devices to move storylines and character development forward. 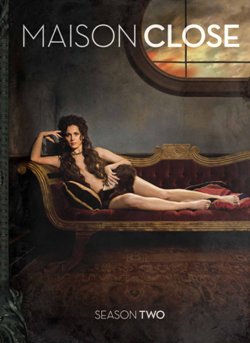 Regarding the storylines themselves, highlighting Mosca and the Moral Order, rather than the stories of individual women (except Véra), offers new takes on 19th-century prostitution. Having a workplace that les prostituées du Paradis also call home gives them a certain amount of comfort not afforded to the ladies of the night on the streets. However, it is still a life fraught with dangers, both inside and outside the brothel’s walls.

After watching the first three episodes of Season 2, I am left wanting. For more. This curious mind wants to know how the relationship between Véra and Jeanne plays out. Ditto the burgeoning one between Mosca and Rose. And what becomes of Hortense and the rest of the women of the Paradise, with the men in their midst threatening to ruin their lives in one way or another?

Maison Close: Season 2 is available in the US today on DVD. It will begin streaming on Amazon Video, Google Play, iTunes, Vudu, and YouTube (Music Box Films channel) on the 16th of February 2016.