Technically, that should be returning to Hulu, since Season 2 of The Bridge had screened earlier this year for a limited time on Hulu Plus. But both subscribers and non-subscribers alike will soon be able to see the next riveting story of the hit Swedish/Danish crime series.

Nordic noir doesn’t get any better than this. The first season

of the award-winning series, The Bridge (Bron/Broen), is a masterful work of storytelling, and if you haven’t seen it yet, I implore you to watch it before diving in for the second, as its arcs set up the reunion of Swedish detective Saga Norén (Sofia Helin, Arn: The Knight Templar) and her Danish counterpart, Martin Rohde (Kim Bodnia, Rosewater), for their next investigation.

opens thirteen months after the finale that saw Saga and Martin part ways after several harrowing ordeals. They haven’t seen or spoken to each other since, and things have changed dramatically for both of them. Saga has a live-in boyfriend now, and Martin, still haunted by nightmares of Jens Hansen/Sebastian Sandstrod, is separated from his wife, Mette, and their kids. What brings them together again is a case and friendship.

A ship with no crew smashes into the Øresund Bridge that links Sweden and Denmark. With the only people on board being three Swedes and two Danes, found chained and unconscious below deck, Saga requests that her (only) friend, Martin, be her partner for the investigation. Request granted.

What begins as a conspiracy by eco-terrorists unfolds into a case involving pharmaceuticals, toxins, and a plot that could kill hundreds if not thousands of people. The taut and gripping storyline is punctuated by subplots that include a high-functioning sociopath (not Sherlock), a dying CEO, and a creepy, codependent sibling.

For Saga and Martin, their friendship deepens as he continues to help her navigate her way through professional interactions and relationship issues, and she helps him avert a family crisis. But things between them, and between them and their loved ones, break down, and it is heartbreaking to watch their suffering. 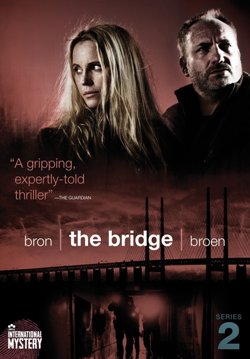 Both Helin and Bodnia are simply superb as the two committed and strong yet still frail halves of an unlikely crime-fighting duo. Watching Helin as a by-the-book cop trying as best she can to lead an emotionally-fulfilling life despite the Asperger Syndrome is truly a sight to behold. Bodnia, too, delivers an incredible performance as a down-to-earth detective still trying to comes to terms with the devastation that occurred in his life.

Season 1 of The Bridge is already streaming exclusively at Hulu/Hulu Plus, which kicks off the new year Scandi-style with Season 2,

starting 2 January 2015. Both seasons are under the Hulu Originals banner, and screen in Swedish and Danish with English subtitles.