Un mousquetaire, he isn’t. He is, though, a sword-fighting nobleman and police commissioner in service to the king in 18th-Century France. He is Nicolas Le Floch.

And he is the titular character of Nicolas Le Floch,

the French mystery series adapted from the novels by Jean-François Parot.

I’ve been hooked on the show since it debuted in the US on MHz Networks earlier this year. Rich productions, complex stories, engaging characters, and fine acting — notably that of the magnetic Jérôme Robart (Un Village Français, 10, Reporters) as Nicolas Le Floch, one of the most charming and charismatic characters to appear on the small screen — make the series a feast for the eyes and little grey cells.

Similar to his Nordic noir counterparts, Le Floch, titled le Marquis de Ranreuil, works in law enforcement. To be precise, he is the Commissaire de Police at the Châtelet in Paris. But unlike the Wallanders of the world, he is neither troubled by his past nor given to a gloomy disposition. Rather, he is delightful — a playful, romantic, and contented bonhomme who eats, drinks, and makes merry chez Monsieur de Noblecourt, the former King’s Prosecutor, and makes passionate l’amour with his lover, La Satin.

And when duty calls, the honorable Nicolas obliges, whether orders are from his superior, Sartine, a commoner who rose through the ranks to be the Royal Lieutenant General of Police, or a member of the court at Versailles, including Nicolas’ friend and First Servant of the King’s Bedchamber, Count de La Borde, and King Louis XV himself.

Similar to the 21st-Century Sherlock, the 18th-Century Le Floch has his Watson-like sidekick in Inspector Bourdeau, plus informants hidden in plain sight on the streets of Paris, such as the gamin reminiscent of Oliver Twist. Then there’s Sanson, the Châtelet executioner-cum-forensic pathologist, who often works alongside Nicolas’ surgeon friend, Doctor Scemacgus, in performing autopsies and providing des preuves de crimes.

Speaking of, the crimes in Nicolas Le Floch are fiction, but plots against the monarchy and amongst the aristocracy were both real and common back in the day. Ditto les maisons closes (brothels) frequented by major and minor characters in the series. Add in historical figures and references — from Louis XV and Madame de Pompadour, to unsuccessful assassin Robert-François Damiens and the Jansenists — and you have a drama that is steeped in French history and brought alive through intriguing storylines.

There have been ten episodes (five series) of Nicolas Le Floch to date, of which the first six are available in French with English subtitles on DVD.

In “The Man with the Lead Stomach” (“L’Homme au Ventre de Plomb“), a night at the opera is cut short for the Count and Countess de Ruissec; their elder son, Viscount Lionel, is dead — a victim not of suicide but homicide. The specter of scandal causes the case to be quickly hushed up, but another murder forces Nicolas to investigate a plot against the Ruissec family. How, though, is it related to a plot against the king and Madame de Pompadour? And who is the mysterious woman in the blue glasses?

Scemacgus is the prime suspect when his lover’s husband, Doctor Descare, and her other lover, Commissioner Lardin, are murdered in “The Blancs-Manteaux Enigma” (“L’Énigme des Blancs-Manteaux“). He refuses to give an alibi, despite knowing that Le Floch will be ordered by Sartine to “poser la question” (use torture) to extract the truth. In royal matters, letters that compromise the King have been stolen, and Lardin’s wife wants to find them as much as Le Floch does, but why?

The supernatural is pervasive in “The Phantom of the Rue Royale” (“Le Fantôme de la Rue Royale“). Locals accuse a young girl of being a witch, possessed by the devil, and Nicolas must fight an invisible force while investigating the murder of Elodie Galaine at the home of her mysterious family. Will the Algonquian Indian suspected of the crime be able to help Le Floch solve the case? And will le commissaire be able to foil the plots against the King, and thus help Sartine save his position and Louis XV keep his kingdom?

In “The Nicolas Le Floch Affair” (“L’Affaire Nicolas Le Floch“), circumstantial evidence points to Nicolas as the murderer of his lover, Julie Lastérieux. While Bourdeau investigates the poisoning, the King, still trusting of La Floch, sends him to London. His mission: to dissuade the rogue Morande from publishing a lampoon of Madame de Pompadour, and to eliminate him altogether if necessary.

Secrets of the Rosicrucian Order figure prominently in “The Tear of Warsaw” (“La Larme de Varsovie“). Said “tear” is a magnificent pearl, one entrusted by the King and Queen to alchemist Count St. Germain to restore its brilliance and prevent a curse from befalling the monarchy. But the gem is stolen, the Count is suspected of murder, and more killings follow. Will the secretive Madame de La Rochefoucault shed light on the evil-doings for Nicolas, or will he fall victim to la Rose-Croix himself?

And in “The Grand Huntsman” (“Le Grand Veneur“), Bourdeau, Scemacgus, and the Duchess of Langremont (a.k.a. La Satin) accompany the Marquis de Ranreuil to Aquitaine to investigate the death of Count Louis-Charles Allas. Was he the victim of the feared beast in the region? What does the mad woman who runs screaming through the forest know of Allas’ and others’ gruesome ends? Before Le Floch can find out, though, he must stay alive in this tale reminiscent of The Most Dangerous Game.

Dark overtones are offset by bits of campiness in Nicolas Le Floch, but the latter’s effects aren’t always successful. Where it works well is in the character of Sartine, played by François Caron. A loyal servant of the king and wanna-be insider at Versailles (hélas, non), he has a taste for colorful outfits (the red, polka-dotted ensemble takes the cake), likes to be carried on his fauteuil from office to carriage, and has a habit of torturing his powdered wigs when things aren’t to his liking. Where the camp shows up but shouldn’t is in the acting for certain minor characters, where the display of their shady natures and devious intentions (e.g. slow turn from profile to full face with requisite beady-eyed glare in place) feels more appropriate to, say, an “Austin Powers” film. 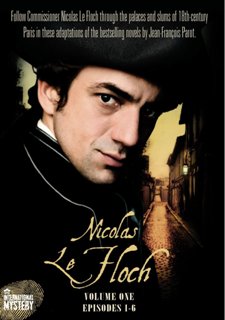 is fabuleux for an action/adventure mystery series, and it’s a fun watch to boot, with bits of levity sprinkled here and there through the characters of Le Floch, Sartine, Bourdeau (Mathias Mlekuz), Noblecourt (Jean-Marie Winling), and La Satin (Vimala Pons in Series 1 and 2, Camille de Pazzis in Series 3).

The fifth series of Nicolas Le Floch was thought to be the last, but French channel France 2 ended up commissioning two additional feature-length episodes based on Parot’s novels from production company Compagnie des Phares et Balises — “The English Corpse” (“Le Cadavre Anglais“) and “The Drowning in the Grand Canal” (“Le Noyé du Grand Canal“) — which comprise the sixth and final series. France 2 is expected to transmit them in late 2014 or early 2015, and hopefully MHz Networks in the US will, too, soon thereafter.