If you happen to be in the Rhône-Alpes and/or Ile-de-France regions of France between now and March 2015, you might also be lucky enough to see filming for the second season of the hit supernatural drama, The Returned (Les Revenants).

Filming began on Monday for the second series of The Returned,

A top-notch spook-fest, Season 1 of The Returned follows the intersecting stories of several walking dead in a mountain town in France — individuals who had died and then mysteriously come back to life without realizing they have been deceased for years — and the impact their reintegration into society has on their families, friends, and community.

Caution: If you haven’t seen The Returned, what follows contains spoilers.

It’s un choc to the system for Claire and Jérôme when their teenage daughter, Camille, shows up at home, four years after her school bus swerved and plummeted off the side of a cliff. Camille is unaware of what happened, and all she wants is a shower and some food (human food, not humans as food) after that long walk home. For Lena, it’s a case of life, interrupted, and she doesn’t appreciate her twin sister’s return one bit. At least not yet.

Meanwhile, Adèle is busy raising her daughter, Chloé, and planning her wedding to Thomas, the captain of the local police force. At the same time, her former fiancé, Simon, is looking for her — a decade after he supposedly committed suicide before they were to be married. When he finds her, Adèle believes she’s seeing and speaking with Simon’s spirit, but she soon realizes otherwise and becomes torn between two lovers.

Then there’s the creepy young boy with the huge eyes and haunting stare who follows Julie home after her in-home nursing visit to Monsieur Costa (who himself becomes dérangé when his wife, dead 30 years, returns to him). Although Julie has no idea of who the boy is and he won’t say (he just won’t speak), she gets protective of her “nephew Victor” and cares for him at her apartment after her busybody neighbor starts prying.

Camille, Simon, and Victor are just three who reunite with the living. The thing is, now that they’ve risen from the dead, how do their loved ones explain their presence to those who know nothing of les revenants?

Reanimating is a feat unto itself, and doing so has also given the zombies supernatural powers, which some of the living experience in frightening and even violent ways.

But why have they come back in the first place? Is it because the end of days is nigh, as the religious Pierre believes? If so, then he must also think that he will not be one of the chosen during the Rapture, since he’s been stockpiling food and firearms at his Helping Hands shelter since he learned that the undead dead are now living amongst the living.

Like Pierre, whose present good works belie a less-than-pastoral past, other townspeople, such as bar manager Toni, have skeletons in their closets that they would just as soon keep hidden in them. Except they can’t, because certain skeletons have a life of their own.

As lives are thrown into chaos because of the zombies, lies become a part of daily conversations, detestable actions become habit for some, and strange lesions begin appearing on the bodies of others. And as the series progresses, details about how and why les revenants died are revealed, and mysteries are explained, through the weaving together of seemingly unconnected stories told in present time and flashbacks.

But questions remain after the showdown between those who have taken refuge at the shelter and the zombies that have come there en masse for their brethren as well as one of the actual living. Why do they want them? Where are they taking them? What will happen to them? And how did the town become completely flooded?

Season Two picks up six months after the cliffhanger. Nothing has been heard from Simon, Camille, and Victor since the horde of zombies took them and disappeared into the mountains. The whereabouts of Claire and Julie, who went with the group to protect their young ones, are also still unknown, as are those of the gendarmes who vanished from outside the shelter while protecting those inside it.

While part of the town is still flooded, authorities have restored order for the residents who chose to stay, including Adèle, who is about to give birth to the child she conceived with Simon, and Léna and Jérôme, who have not given up hope of finding Camille and Claire and continue seaching for them.

Then a man named Berg arrives in town. He, a stranger to these parts, seems to know more about the rumors of a second coming of the living dead than he admits — rumors that the authorities don’t take seriously… until a new wave of resurrections begins.

From the sounds of it, the second series could be as good as the first. 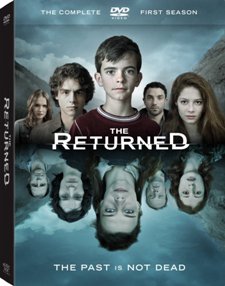 Season 1 of The Returned

is one heckuva scary, binge-watch-worthy, must-see Euro TV thriller. Not a cover-your-eyes gory kind of scary, though; these are not that sort of zombie.

Rather, what makes for its hairs-standing-on-end chilling suspense are the sudden “What the…?!?” occurrences from out of nowhere, the eerie, fog-filled, desolate (yet still magnificent) mountain setting, the devious evoking of tension and dread about what might happen next, and the brilliant acting of the cast.

Canal+ will debut the eight hour-long episodes of The Returned: Season 2 in France in mid-to-late 2015. No word yet on which US and UK programmers will pick up the second series, so stay tuned for updates.

Adapted by Fabrice Gobert from the Robin Campillo film of the same name, The Returned is written by Gobert, Audrey Fouché, Coline Abert, and Fabien Adda. The series is directed by Gobert, and produced by Caroline Benjo, Jimmy Desmarais, and Barbara Letellier for Haut et Court TV.

(Haven’t seen Season 1? Visit our French Language TV Programs page to find out where you can watch it.)