When the term Nordic Noir comes up, “action-packed” isn’t usually one of the top five or even ten descriptors. Unless you’ve seen the braksucce (smash hit) Swedish crime drama, Johan Falk.

As a latecomer to the Johan Falk film series, watching it as it nears the end of its run on MHz Networks has been like walking into a party when the host is about to call it a night. I wondered what good stuff I missed.

Now I know. Well, I do as far as what happens at the beginning of the series, meaning the three films that comprise the Johan Falk Trilogy.

Johan Falk (Jakob Eklund, Wallander) is a man with issues. A detective with the Gothenburg Police, he doesn’t work or play well with others, has a raging temper, and goes off like a shot without a word to anyone when he gets single-minded about something. That last part sounds like it could be a good quality when it comes to catching criminals, but when Falk’s actions put innocent people in harm’s way… not so much.

The trilogy opens with “Zero Tolerance.” It’s Christmas Eve, and Falk and fellow detective Anja Månsdottir (Jacqueline Ramel, Beck) have a bit of holly-jolly delight before his bare cupboards and fridge force him to go out for food (Burger King, no less). Then all hell breaks loose and last-minute shoppers get caught in the crossfire when Johan tries to stop a jewelry store heist.

After chasing the burglar by car and on foot through the streets and a shopping mall, Johan kills him while another man, aiming at Johan, shoots a bystander by mistake. Three witnesses, including Helén Andersson (Marie Richardson, Verdict: Revised), pick out known criminal Leo Gaut (Peter Andersson, Jack Ryan: Shadow Recruit) as the innocent victim’s shooter from mug shots, but they don’t during the police line-up. (Hmm…) Subsequent events lead Leo to accuse Johan of police brutality, and the latter is arrested at the court hearing. Outraged, Johan makes a run for it and escapes custody.

Now on the lam, Johan takes a few underhanded measures of his own to clear his name and bring Leo to justice. Both aims are made more difficult, though, with the not one but two bounties on his head. With cops and criminals looking to take him down, Johan can only do but so much. Ultimately, his fate rests with the terrified witnesses.

Several minutes into the second film — “Executive Protection” — I began biting my fingernails (bad habit, I know) and didn’t stop until I had none left.

In Estonia, Sven (Samuel Fröler, Headhunter) agrees to pay security expert Nikolaus Lehmann (Christoph M. Ohrt, Highlander) 20 percent of his factory’s profits to stop the harassment by local gangsters, only Lehmann’s method isn’t what Sven expects and he wants out of the deal. In Sweden, Johan and now girlfriend Helén attend the funeral of Sven’s father — a surprise for Sven’s wife, Jeanette (Lia Boysen, The Inspector and the Sea), since Johan didn’t go to the one for her sister/his former girlfriend.

Two incidents — one at Sven’s office, the other at his home — neither of which the local Swedish police do anything about, force Sven to turn to Johan for help in dealing with Lehmann, who has upped the ante on his demands. The thing is, Johan got tired of being a desk jockey following the case with Leo Gaut and resigned from the police, so he gets the team of former cop turned security specialist Mårtensson (Krister Henriksson, Wallander) to protect Sven and his family.

It’s an operation in which the smallest detail matters, so when Sven thinks he’s pulled a fast one on Lehmann, he actually makes matters much worse. And when the hot-headed Johan has an altercation with Lehmann’s attorney, Jeannette is the one who pays for it.

Lastly in “The Third Wave,” Johan’s former boss Sellberg (Lennart Hjulström, The Girl Who Kicked the Hornets’ Nest), now the head of Europol’s Organized Crime Unit, is in The Hague giving a tough crackdown-on-crime speech that is broadcast throughout Europe. In London, financial executive Rebecca (Irina Björklund, Maigret) discovers that her decade-long boyfriend Kane (Ben Pullen, An Ideal Husband) has been laundering millions in dirty money, a revelation that makes her a mark for Kane’s associates.

Rebecca hightails it to The Hague to ask Sellberg for help, and her disappearance from work prompts her employer to sic his security director Devlin (Nicholas Farrell, The Iron Lady) and his team on her. The still-unemployed Johan, along with Helén and her daughter Nina, also head there from Dunkirk, as Sellberg wants to speak with Johan about joining him at Europol. The restaurant where the various parties meet becomes a disaster zone when assassins show up and gunfire ensues.

Johan helps Rebecca to escape, but now Nina and Helén must go on the run, too. (See what I mean about innocent people getting caught up in his messes?) And the security team sent to bring Rebecca back to London goes rogue. The hunted and hunters converge in Munich, where Johan et. al. attempt to get evidence against Kane and to stay one step ahead of the hired guns. 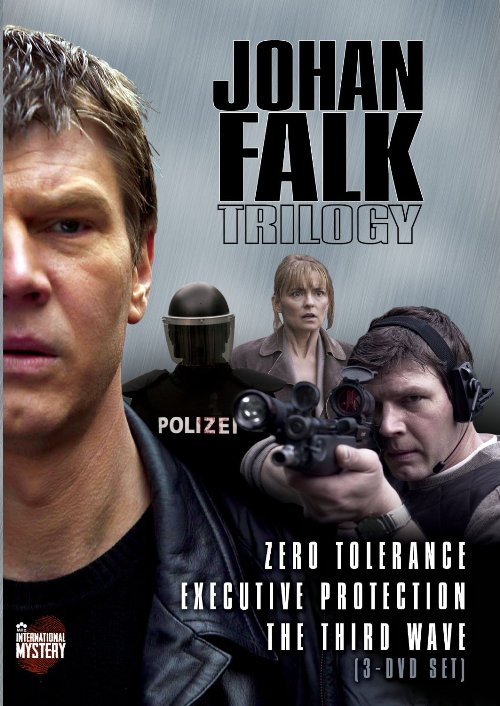 Each of the films in the Johan Falk Trilogy

is a nerve-racking, heart-pounding thriller. And Jakob Eklund’s portrayal of the cop with sharpshooter skills but not much of a conscience is superb. His ability to shift on a dime from a fire-in-his-eyes renegade to a reflective soul racked by guilt or torn between two opposing choices is pretty awesome.

The parts that made me exclaim, “Oh, come ON!” were those that I found to be melodramatic or played over the top, such as when a nasty character turns into a whimpering sod after nearly throttling someone to death, or when a gutsy one is oh-so stealthy in one scene but blatantly obvious about where the hideout is in the next. These, thankfully, were few and far between, and the breakneck pace of the action kept me riveted to the screen.

As noted earlier, MHz Networks is currently screening the final episodes of the 2009 Johan Falk series that followed the trilogy. You can catch the penultimate episode, “Operation Nightingale” (another good one), at the MHz website through Monday, 21 July 2014. The last episode, “The Outlawed,” premieres this Sunday, 20 July, at 9 PM ET on the MHz Worldview broadcast and Roku

channels and online at MHz Live.