Nordic noir fans, get thee to Gotland. At least vicariously, through the eighth and ninth episodes of the hit Swedish mystery series, Maria Wern, which are now on DVD. 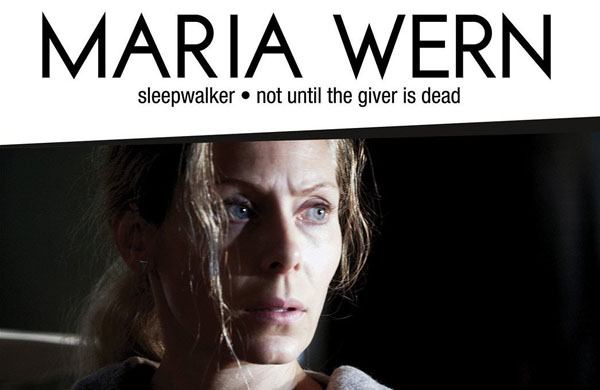 It’s been a while since I’ve watched this series (so much to watch, so little time), so I was tickled pink when the DVD set for Maria Wern: Episodes 8 and 9 arrived in my mailbox a few days ago.

Soon after I began watching the first of two discs, I thought, “I don’t remember Maria Wern being this dark.” Because it is quite that. Dark. Intriguing. Worth watching.

Similar to other titles in the Nordic noir sub-genre, such as Wallander and Sebastian Bergman, themes of societal issues are the “heart of darkness” of the Maria Wern stories. One that is perhaps more grey than noir, and runs throughout the series, is the balance of work and home life, or lack thereof, which isn’t limited to Inspector Maria Wern, played by Eva Röse (Real Humans, The Inspector and the Sea). 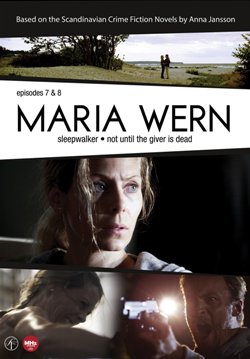 For lead detective Wern, getting home to her two young children at a decent hour every day isn’t something she can count on. (Good thing she has a reliable babysitter who can stay later than expected.)

Röse as Wern is my favorite part about the show. The stories are good, but she is great. I haven’t read either of the two “Maria Wern” novels by Anna Jansson that have been translated into English, so I can’t say if the TV adaptations hold true to the author’s characterization of Wern. Regardless, Röse plays Wern as a loving mother, kind friend, and compassionate, level-headed, highly-capable, and well-respected cop in a male-dominated work environment that has only one other female on the crime team. There’s an authentic quality to Röse’s Wern, not unlike Krister Henriksson’s portrayal of Kurt Wallander.

Regarding the latest episodes, it’s been a few years since Maria arrived in Gotland as a widow, and her mourning the loss of her husband has abated by the time we catch up with her in…

After leaving Erika with a new acquaintance at a bar, Maria intervenes in a fight happening in the bay and gets herself beat up — and stuck by a needle — in the process. Added to the stress of wondering whether she’s been infected with a deadly disease, Wern has a brutal murder to investigate, one that happened near the location where she was assaulted and nearly drowned to death.

Then another dead body turns up, and the first assault victim has died, which means Maria and her team have three murders to solve. It’s tough going, since some suspects have alibis, others aren’t cooperating fully, and there’s nary a clue, save one.

Meanwhile, Ek is being petulant about the break-up with Erika, Erika is getting closer to her new love interest, Maria is trying to put concerns about her health out of her mind, and Sebastian is seemingly putting the moves on Maria. Oh, and the killer is still on the loose.

“Not Until The Giver Is Dead” (“Först När Givaren är Död“)

A house is torched in the early hours of the morning. A few hours later, folks at the stables in Visby are busy preparing for the Medieval Week festivities, including Maria’s son Emil (Oscar Pettersson) and daughter Linda (Matilda Wännström). When Maria and Erika are called to the scene of the arson, it is presumed that the 64-year-old resident is dead under the smouldering rubble, and the still-snarky Ek finds the skull of a child amongst the ashes.

Soon thereafter, the body of a young woman is found in a picturesque enclave where the reticent residents seem unsettled. Ek and Arvidsson turn up some interesting information, but not in time to prevent another death, which sets Maria searching for clues to connect the victims. What she finds are documents in Latin. With help from a professor, pieces of the puzzle begin to fall into place, and the team must hurry before the festivities turn deadly.

The stories in Maria Wern: Episodes 8 and 9 are complex and well-paced, and the darkness doesn’t get overbearing thanks to gorgeous shots of Gotland and occasionally humorous banter between the central characters. My rating: ★★★★

(Note that certain arcs in previous episodes carry over into these two, so if you haven’t seen them, you can catch up on them here.)