Adapted from the mystery novels by Belgian author Georges Simenon, the French-produced Maigret TV series (there have been two British and one Belgian productions, too) is one of the most popular dramas in MHz’s library.

Et pourquoi pas? Simenon’s stories, set in early 20th-century Paris and environs, are well-crafted, intriguing, and dark, and the late Bruno Cremer (who can also be seen in Series 4 and 5 of the Italian mafia drama The Octopus) is outstanding as the serious, cynical, pipe-smoking detective, Commissaire Jules Maigret.

Maigret was noir before noir became all the rage. And starting tonight, Euro TV fans who don’t yet have a subscription to MHz Choice can get a few last looks at the series that covered 54 of Simenon’s 75 “Maigret” novels before it goes off the air for good.

Episode 1: “Maigret in Montmartre”
A helpful Montmartre stripper tips off the police that she’s overheard some customers plotting a murder. Everyone shrugs things off… until she’s the one who turns up dead. Maigret starts nosing around to see who the stripper’s off-the-clock actual boyfriend is.

“Maigret in Montmartre” airs Tuesday, 12 May 2015, at 9 PM ET, and again at midnight, on both MHz Worldview and MHz Online. It re-airs Saturday, 6 June, at 3 PM, on MHz Worldview only. 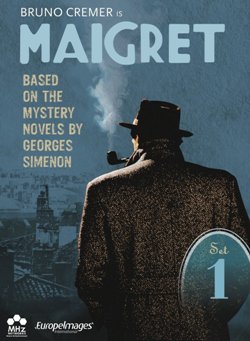 Episode 2: “Maigret and the Burglar’s Wife”
It’s tough luck for a hard-working burglar. Instead of a safe, his break-in lands him next to a female corpse. The thing is, by the time his ex-prostitute wife calls on her old arresting officer, Inspector Maigret, and the Commissaire arrives on the scene, the corpse has vanished.

Episode 3: “Maigret and the Flemish Shop”
When a demanding single mom disappears after leaving her lover’s shop on the Belgian border, Maigret is unofficially called in by her lover’s family. They seem to be the prime suspects in the case, so Maigret must either disprove their alibi or find an explanation.

Episode 4: “Maigret and the Judge”
On assignment in the provinces, Maigret acts on a tip to find a distinguished judge dragging a corpse out of his house, presumably to dump it in the sea. That’s bad enough, but now he also has a lead to a decades-old, previously undiscovered murder.

Episode 5: “Maigret and the Headless Corpse”
At a small café near the canal where a headless body has been found, Maigret is intrigued by the reticent proprietress and tries to draw her out. Could the corpse could be her husband, who is supposedly away on a business trip?

“Maigret and the Headless Corpse” airs Tuesday, 16 June 2015, 9 PM ET, and again at midnight, on MHz Worldview only.

All Maigret episodes are shown in French with English subtitles.