Following up on yesterday’s post regarding the last you’ll see of Maigret on broadcast telly, you have your final opportunity to watch the Italian noir mystery series, Fog and Crimes, on MHz Worldview starting tonight.

Set in the northern Italian region of Ferrara, Fog and Crimes revolves around the deadly goings-on along the River Po and its surrounding areas — dark and tangled mysteries with histories going back to Worl War II that the brooding, cigar-smoking Commissario Franco Soneri (Luca Barbareschi) must unravel. Less enigmatic is his relationship with the stunning Ukrainian lawyer, Angela Cornelio (Natasha Stefanenko).

Beginning this evening, viewers can watch all ten episodes that make up the first two seasons of Fog and Crimes. 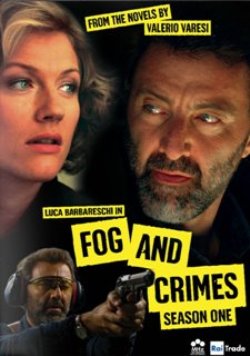 “The River of Fog”
Soneri investigates the murder of two brothers who had served together in the Fascist military 50 years earlier. Before he can discover the truth, he must navigate ancient loyalties and deep-rooted rivalries.

“Rooms for Rent”
In his investigation of the murder of an elderly friend, Soneri realizes that he misunderstood who she was. The key to solving her murder may lie in understanding more about her secret life.

“Rooms for Rent” airs tomorrow night, Thursday, 14 May 2015, at 9 PM ET, and again at midnight, on MHz Worldview and MHz Online.

“Trying to Forget”
Soneri finds himself going up against Angela, who’s defending a corrupt police officer who’s also a chronic drug user and liar. But even Soneri realizes the defendant may not be guilty of murder.

“The Mystery Film Club”
When Angela meets a woman at the spa, Soneri is relieved that she has a new friend, because he’s busy working a murder case that reveals the darker side of the female nature. 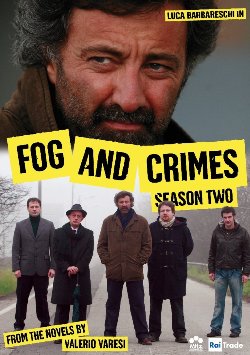 “The Winter Sea”
Soneri investigates the deaths of two senior citizens — a quite couple who got their thrills from driving fast, and whose bodies are found at the bottom of the River Po in their sports car.

“Lost Children”
A frightened boy hides in the bushes next to the body of a woman washed up on the banks of the Po. He responds only to Soneri, who agrees to look after him until social services can step in.

“No Sign of Stopping”
In investigating a hit-and-run death committed by a married man who had a string of affairs, Soneri consults with a local hairdresser who kept up with the activities of all the town’s residents.

“A Doll’s House”
Angela travels back to Kiev for personal reasons, while Soneri investigates the brutal killing of a prostitute, whose body was found decomposing in her house months after her murder.

“Parental Rating”
A teenage girl from a well-known family is found killed. Inspector Soneri’s old friend is the partner of the victim’s mother, so he cancels his vacation to lead the investigation as a personal favor.

“False Papers”
Soneri is about to transfer to Rome when a case comes up, one he can’t walk away from: a high-profile attorney is found dead in his apartment, and there seems to be a connection between the victim and Soneri’s ex-girlfriend, Angela.

All episodes of Fog and Crimes are shown in Italian with English subtitles.

For viewers without access to MHz Worldview, visit our Italian Language TV Programs page for other viewing options.