The French go noir in Witnesses, the crime drama/mystery/psychological thriller starring the acclaimed Thierry Lhermitte that makes its US premiere next month.

I happen to be a big fan of Thierry Lhermitte, and not just because he plays the title character in the Gallic version of Doc Martin. (If you haven’t seen The Closet or The Dinner Game, these are must-watch, in my book.) So I was thrilled when it was announced that he and Marie Dompnier (Détectives) would lead the cast of Witnesses

Aside from the theme song and imagery during the title credits (which, while atmospheric, annoyed me for some reason), everything else about Witnesses, a Cinétévé production for French broadcaster France 2, is terrific. 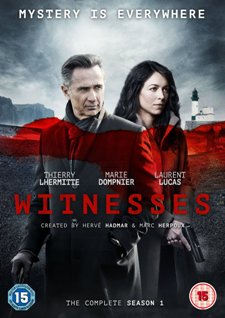 Created by Marc Herpoux and Hervé Hadmar, who both wrote for the French thriller, Pigalle, la nuit, the six-part Witnesses follows the investigation into the who and why behind bodies of recently-deceased and unrelated persons being posed as families in new show homes in the Normandy city of Tréport.

The mystery isn’t just about grave robbers digging up and displaying these corpses, either. At each of the trespassed show homes is an item, a clue, directly related to Paul Maisonneuve (Lhermitte), a legendary and now retired detective from the Crime Squad in Lille. The first item discovered is a photo of Paul himself, which begs the question of what the connection is between him and the perpetrator(s).

So Maisonneuve is forced out of retirement to crack the case with the lead investigator, Lt. Sandra Winckler (Dompnier), a feisty and skilled detective with a live-in beau, young daughter, and an interesting past with Maisonneuve, whom she trained under.

As the series progresses, Paul’s past (including why he limps and uses a cane) comes back to haunt him in ways he couldn’t have imagined. A past he must now confront, because it is in Maisonneuve’s former life where the truth behind the motives for the macabre incidents lies. Someone from it is out to get him.

As far as crime dramas go, Witnesses is riveting stuff. It starts as a police procedural and slowly (but not too slowly) transforms into a psychological thriller akin to the British serial The Fall, only here the cat-and-mouse has Lhermitte’s Maisonneuve as both the hunter and the prey. And the tensions between Paul and the grudge-holding Sandra (another sub-plot of sorts), as well as those between each of them and others, combined with the dreariness of dark and rain-soaked settings within Normandy, fuel and heighten the drama.

And the acting is top-notch. Lhermitte plays Maisonneuve with such an icy cool that you just know the man has secrets he’d rather keep hidden, but now can’t. (Or at least shouldn’t.) Likewise Dompnier’s performance as Winckler won her the Golden FIPA award for Best TV Series Actress at the 2015 Biarritz International Festival of Audiovisual Programming. And Laurent Lucas is positively frightening as the “wolf among wolves” Kaz Gorbier.

Check it out. Witnesses