Upwards of seven million Germans have been tuning in to the mystery/crime drama series, Marie’s Mind for Murder, since it began airing in 2008, and now Euro TV fans in the US and UK can (binge) watch the wunderbar program on DVD.

(known as Marie Brand in Germany) is a solid police procedural featuring a detective duo of opposites, intriguing murder mysteries, humor, and smarts.

Following the death of her father, a police inspector who died in the line of duty, Marie Brand transferred from the Homicide to Burglary squad, where she worked 15 years. Married to pet store owner Herms (Stefan Reck, Tatort), the easygoing, perceptive, and logical Marie has a thing for prime numbers and acute skills in observation and deduction. That she is ambidextrous and can write two things at once, well, that’s just amazing.

Jürgen Simmel, on the other hand, is a single, brash, and politically incorrect homicide detective and ladies’ man (despite having one problem after another in his love life). A talented, compassionate, and athletic cop (who uses karate when needs must), Jürgen goes by his instincts; sometimes they’re wide of the mark, but mostly they’re spot on.

We meet Brand and Simmel in “Marie and the Perils of Greed” (“Marie Brand und die Tödliche Gier“), in which Jürgen deems the fatal shooting of a young woman to be the result of a botched burglary. Brand suspects a cover-up for murder, and stays in Homicide for this one-off from Burglary until she and Simmel catch the killer.

So much for the one-off. In “Marie and the Charm of Evil” (“Marie Brand und der Charme des Bösen“), Simmel and Brand, now officially partners, investigate a car bomb explosion that killed a young office worker. Chief of Police Dr. Gustav Engler (Thomas Heinze, Tatort) closes the case after evidence identifies the bomber, but Marie continues to investigate and Herms pays for it.

Brand and Simmel are called to an apartment where two women and a man lie dead on the floor in “Marie and the Night of Retribution” (“Marie Brand und die Nacht der Vergeltung“). The crime scene indicates a double murder and suicide. However, Marie notices something that makes her think otherwise, and when another murder occurs and potential evidence goes missing, she’s sure the killer is still on the loose.

A neuropathologist is found dead in his lab in”Marie and the Murderous Oblivion” (“Marie Brand und das mörderische Vergessen“). Although his clumsy, flaky assistant thinks she might have caused his death by accident, Brand believes someone else did it on purpose. Meanwhile, Herms’ forgetfulness concerns Marie, and after he sees a specialist in dementia, she gets news that rocks her world in quite an unpleasant way.

The owner of a roller coaster company is murdered at the amusement park in “Marie and the Last Ride” (“Marie Brand und die Letzte Fahrt“), and one key suspect had a motive, means, and opportunity. And no alibi. As the detectives question the victim’s relatives and colleagues, Simmel learns something he wishes he hadn’t about French fry stands while trying to convince Marie of the significance of the red tie mentioned in her horoscope.

Marie awakens in the woods next to the body of a dead woman in “Marie and the Lady in the Game” (“Marie Brand und die Dame im Spiel“). Via flashback, we learn how Brand came to be there, then back in present time we follow the investigation, from a chess championship game, to an attempted and a successful murders.

In “Marie and the Fall of Mankind” (“Marie Brand und der Sündenfall“), a Catholic priest is assaulted inside his church, a parishioner’s boyfriend is killed in the apartment they shared, and another person becomes a murder victim during Brand and Simmel’s investigation. Meanwhile, Engler deals with problems in his personal life at the office.

The body of a dead man interrupts Brand and Simmel’s drive to a seminar in “Marie and the Moment of Death” (“Marie Brand und der Moment des Todes“). The investigation leads the detectives to an art gallery where a valuable painting had recently been stolen. With few clues to work with, Marie goes undercover while Jürgen falls for a suspect.

There is collateral damage during the kidnapping of two women, one of whom is Marie, in “Marie and the Wrong Woman” (“Marie Brand und die Falsche Frau“). Ransom demands are made and later escalated after a third woman is abducted while under Jürgen’s watch. Then, with one clue and a revelation, Brand starts putting two and two together.

Lastly, in “Marie and the Song of Love and Death” (“Marie Brand und das Lied von Tod und Liebe“), a foreign national dies while filming a commercial, and Marie notices odd behavior amongst some of the witnesses. And that isn’t all: She becomes besotted with a handsome stranger. And there’s another suspicious death to investigate. Thing is, all of the suspects have alibis. 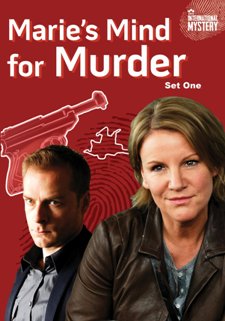 Marie’s Mind for Murder is one of my favorite Euro TV programs for several reasons. First and foremost, Mariele Millowitsch and Hinnerk Schönemann are terrific as Brand and Simmel, one of the most likable and engaging Euro TV detective duos that is still on German telly. (Of the 15 made-for-TV films produced to date, the latest screened on ZDF just two weeks ago.)

While the relationship between Brand and Simmel starts off a tad rocky, it progresses and grows into one where the colleagues know, trust, and like each other, look out for each other, and challenge each other to go beyond their comfort zones. It’s refreshing to see that, although Brand and Simmel are essentially the same people throughout the series, each character becomes influential to the other, and they both develop in ways that keep them fresh for viewers.

For example, Marie starts off as a dowdy-looking woman in cardigans, trainers/sneakers, and a plain-Jane haircut, then transforms into a more stylish one with her leather jacket, heels, and sexy ‘do. Jürgen, for the most part always suited and booted, grows in the way he interacts with people. He can still be dismissive and overly sensitive at times (such as when the pathologist needles Jürgen, hilariously, I might add, about his Spanish girlfriend), but he becomes less rough around the edges over time.

Storywise, Marie’s Mind for Murder is clever without being overly complicated. Major storylines and subplots are well-devised and intricate, with enough red herrings to keep you guessing, and conclusions are satisfying. (This, unlike some other mysteries whose endings can leave viewers feeling let down or frustrated.) Drama and humor are well-balanced (love the zingers), and street scenes and cutaway shots of Cologne, where the films are set, add the right amount of atmosphere to give viewers a sense of place.

The first ten films in Marie’s Mind for Murder, each as good as the next, are on the five German-language/English-subtitled DVDs of Set One, now available in the US

Spanish mystery-crime thriller Parot has premiered in the US.