Here’s a fantastico way to kick off the week: streaming episodes of three of the most popular Italian TV series on American telly, and doing it for free.

MHz Networks is giving new and long-time fans of Euro TV the opportunity to discover or get reacquainted with a few of Italy’s top (fictional) cops with its free offerings of episodes from Detective Montalbano (Il Commissario Montalbano), Fog and Crimes (Nebbie e Delitti), and The Octopus (La Piovra), each of which is shown in Italian with English subtitles. 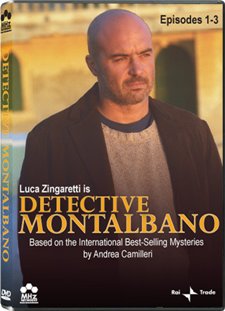 Adapted from the crime novels by Andrea Camilleri,

is one of Italy’s most successful television exports. Its 26 feature-length episodes originally aired in Italy between 1999 and 2013, and the massive popularity of the show gave rise to a prequel, The Young Montalbano.

The eponymous mystery drama stars Luca Zingaretti (Borsellino: The 57 Days) as Commissario Salvo Montalbano, the charismatic head of the police precinct in the fictional seaside town of Vigàta in Sicily, and costars Peppino Mazzotta as his young protégé, Detective Fazio; Cesare Bocci as lady’s man and fellow inspector, Detective Augello; and Angelo Russo as the blundering but ever-loyal Officer Catarella.

A down-to-earth guy with integrity, little patience for bureaucratic nonsense, and a passion for food as well as crime fighting, Montalbano uses his instinct, well-honed detective skills, and ability to connect with witnesses and suspects to solve murders committed by everyday citizens and Mafia members alike.

Montalbano and his team go in search of the person who strangled a woman to death in “The Voice of the Violin,” which is streaming at MHz Online until 22 September 2014. 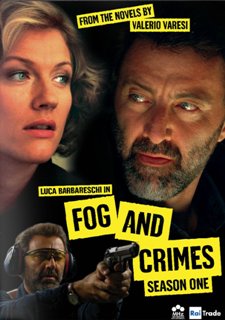 Another series of adaptations is Fog and Crimes,

which is based on the crime novels by Valerio Varesi.

The protagonist of the show’s fourteen feature-length episodes is Commissario Franco Soneri, the brooding loner of a police chief played by Luca Barbareschi.

Starring alongside him are Natasha Stefanenko as Angela Cornelio, an attorney and Soneri’s love interest, and the River Po, whose strength and beauty underscore the mysteries that surround the crimes that occur in and around Ferrara in northern Italy.

The titular, thick as zuppa di piselli fog in Ferrara hides criminals and their secrets — wounds and grudges that have festered since World War II, when Partisans battled the Fascisti and turned neighbors into enemies.

Available at MHz Online until 22 September 2014 is “Rooms for Rent,” in which Soneri’s investigation of an elderly friend’s murder could shatter the memories of his marriage. 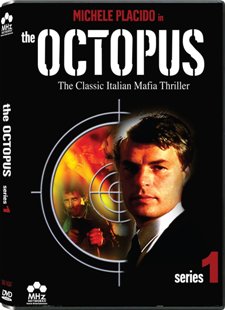 Lastly, there’s the blockbuster The Octopus

(La Piovra), a cult classic of a thriller whose title is synonymous with “the Mafia” in Italy. The first miniseries was so successful (especially in Eastern European countries) when it debuted in 1984 that it spawned another nine, which premiered about every two years through 2001.

The first series of The Octopus stars Michele Placido as Corrado Cattani, a detective who moves with his wife and daughter from Milan to a small town in Sicily, where he is the new Chief Inspector following the murder of his predecessor by the local mafiosi.

It doesn’t take long for Cattani to discover that the Mafia’s “tentacles” have a grip on people in every echelon of society here, and his battles with the mobsters have devastating consequences, both personally and professionally.

MHz Online is streaming Episode 2 of The Octopus until 22 September 2014.

To find out where you can watch more episodes of Detective Montalbano, Fog and Crimes, and The Octopus, check out our Italian Language TV Programs page.