The long-awaited DVD for The Eagle: A Crime Odyssey (Ørnen: En Krimi-Odyssé), Season 1 — the 2005 International Emmy® winner for Best Drama — was finally released yesterday in the US, and it’s such a hit already that Amazon has temporarily sold out of it.

Why all the fuss? Well, for fans of Nordic Noir and Scandinavian crime dramas, The Eagle: A Crime Odyssey is pretty much required viewing. For nearly everyone else, maybe it isn’t must-see TV, but it certainly is try-it-you’ll-like-it TV.

This Danish ensemble-cast crime serial takes its name from the central character, Hallgrim Ørn Hallgrimsson, the half-Icelandic, half-Danish detective known as “The Eagle” (Ørnen), owing to his keen insight and abilities to assess situations and take quick actions. Hallgrim (Jens Albinus, Borgen) is at once a confident and competent cop, a charismatic lady’s man, and a tormented soul racked by flashbacks of past traumas and held captive by surreal visions and interactions with persons living and dead who both guide and taunt him.

Similar to Odysseus, the hero of Greek mythology, Hallgrim has no home to speak of (he lives in a hotel), although he tries to physically and symbolically return “home.” These attempts are thwarted by an unwillingness to confront the darkness within him and by the crimes that he is called on to solve in Denmark, the other Scandinavian countries, and across Europe. Whether or not Hallgrim is aware of his likeness to the mythical hero, he still gives each case a codename based on characters from Homer’s The Odyssey.

As events unfold, we learn that Hallgrim is to be the chief investigator of a new Danish law enforcement unit, one tasked with bringing cross-border network criminals to justice, such as those that traffic drugs, weapons, humans and human organs, and engage in fraud, extortion, and terrorism. His elite team includes prosecutor/legal expert Marie Wied (Marina Bouras, Unit One), white-collar crime investigator Villy Frandsen (Steen Stig Lommer, Unit One), street-savvy detective Nazim Talawi (Janus Nabil Bakrawi, The Killing), tech whiz Michael Kristensen (David Owe, 2900 Happiness), and forensic technician Ditte Hansen (Susan Olsen, The Blessing) — all of whom work under the direction of unit head Thea Nellemann (Ghita Nørby, Unit One).

In the two-part series opener — “Codename: Sisyphus” — Hallgrim is about to fly to Iceland to see his dying mother when he is ordered to deplane and investigate the murder of a police officer at Copenhagen Airport. There is talk of jihad and hijacking, and two known criminals are aboard another plane with a gun. Elsewhere at the airport, Marie and Frandsen prevent another criminal from leaving Denmark, but the cops guarding the private jet are shot and a second mobster escapes with the aid of Russian mafia man Sergej Varsjinskij (Thomas W. Gabrielsson, The Protectors).

Hallgrim’s quest to catch Sergej Varsjinskij, which could be likened to the legend of Sisyphus, the king whose eternal punishment was pushing a boulder up a hill, only to have it roll down time and again, is one of the arcs that threads the Season 1 episodes, while others, such as Ditte’s ongoing tension with ex-husband and former boss Jens Hansen (Henrik Lykkegaard), Frandsen’s dying wife, and Hallgrim’s personal relationships (particularly with women), carry through to the second and third seasons.

In the remaining Series 1 episodes, we encounter references to other creatures of Greek myths, including: the monster that Odysseus escaped but members of his crew didn’t in “Codename: Scylla,” which focuses on the murder of a large finance company’s female executive; the sacrificed daughter of King Agamemnon in “Codename: Iphigenia,” in which the main prosecution witness in a murder trial is herself murdered; the Greek god of war in “Codename: Ares 1 & 2,” the two-parter that revolves around a cache of enriched uranium found in Copenhagen and Sergej Varsjinskij’s possible connection to it; the Greek goddess of retribution in “Codename: Nemesis,” in which the unit tracks a women suspected of trafficking and prostituting young women across Europe while there is a €200,000 bounty on Hallgrim’s head; and the Greek god of the underworld/dead in “Codename: Hades,” which finds Hallgrim in hospital recovering from the attempt on his life as the team, with help from partnering nations, go after the hitman and the man who wanted to avenge his brother’s death with Hallgrim’s. 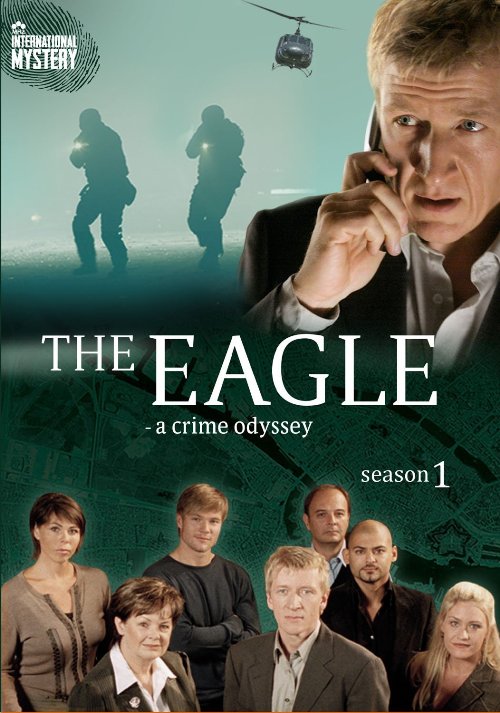 Like other popular Euro TV crime dramas, each episode of The Eagle consists of a self-contained crime storyline that intersects with the main arc. That, plus the personal stories of the heroes and villains, the fine acting, and on-location scenes in cities across Europe, make The Eagle quite an engrossing watch.

And the series’ theme song, “Forgiveness” — composed by Jacob Groth and performed by Misen Groth — is as haunting as Hallgrim is haunted.

All eight episodes on the 3-DVD set for the first series of The Eagle: A Crime Odyssey

are shown in their original Danish language with English subtitles.