Meet Franz Leitmayr and Ivo Batić of Tatort: Munich, the detectives who’ve been together longer than any other team in the history of the German crime drama franchise.

Tatort turns 50 in 2020, and January marks the 29th year of Miroslav Nemec (Dr. Klein) and Udo Wachtveitl (Im Schleudergang) playing the Munich-based detective duo of Croatian investigator Ivo Batić and Munich native Franz Leitmayr, who have worked on more than 80 cases in the Bavarian capital to date.

Here in the States, MHz Choice began premiering episodes of Tatort: Munich this past Tuesday. As they note in their heads-up, “The episodes presented in this season are a limited selection of what is available at this time. They will not be rolling out in the order in which they were originally released in Germany.” 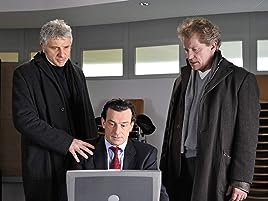 We meet Ivo and Franz in the first stateside episode, “At Any Cost,” in which the detectives, along with Luca Panini (Leonardo Nigro, Forgive Us Our Debts), a colleague from Verona, Italy, investigate the death of a young man. At first blush, it appears the victim, a journalist, had committed suicide; however, clues suggest his death was the result of foul play — and Ivo’s childhood friend, businessman and union leadership candidate Leo Greedinger (Thomas Sarbacher, Marie’s Mind for Murder), is the main suspect. 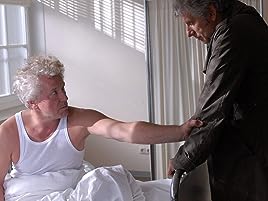 “We’re the Good Guys” finds Franz investigating the murder of a female colleague from the Narcotics division with little help from Ivo, as the latter is suffering from amnesia. Ivo’s situation gets worse when evidence points to him being the cop killer and Stolze (Michael Mendl, Dark) from the State Police, who is leading the homicide case, pulls Franz off it for not following orders. A break in the case gets Franz put back on it — but also puts Ivo in the crosshairs of a gunman.

Both of these Tatort: Munich episodes originally aired ten years ago, so there are eighteen years’ worth of the Batić-Leitmayr partnership backstory that we don’t/can’t know about. So MHz’s choice in introducing us to Ivo and Franz by way of episodes whose storylines involve the detectives personally allows us to catch up, if you will, and get who they are as cops, colleagues, and close friends as quickly as possible.

The plots of these two feature-length episodes are intricately woven, and Nemec and Wachtveitl have a natural, easygoing rapport and rhythm with each other in playing Ivo and Franz. Now that the depth of their partnership and friendship has been established, it will be interesting to watch them work on cases in which (I presume) they’re not so intimately involved and to (hopefully) find out more about their personal lives.

Tatort: Munich: Season 1 is currently streaming in the US exclusively on MHz Choice and its digital channels, including MHz Choice on Amazon.