The business of wine can be deadly. Just ask Benjamin Lebel, the wine expert who’s solved many a murder committed amidst French vineyards in the hit series Blood of the Vine.

Adapted from “The Winemaker Detective Series“

Pierre Arditi (The Horseman on the Roof, My American Uncle) stars as Benjamin Lebel, the charming, sophisticated, and world-renowned enologist whose annual wine guide can greatly help or hinder a vintner. He’s also a highly-skilled amateur detective, as evidenced by the multiple murder cases he has solved. We meet up with him again in…

Season 3 opens with a young woman running for her life from a driver in hot pursuit. Then…

Benjamin and his assistant Mathilde (Catherine Demaiffe, Mr. Nobody) are in Beaune, the wine capital of Burgundy, to conduct an estate assessment requested by William Ubayre, the son of estate owner Jean-Guillaume. The elder Ubayre, a nasty bloke, wants the assessment cancelled and the two consultants gone, and the already-tense situation gets worse when a hailstorm hits and Benjamin finds a dead body amongst the vines. (Guess who it is.)

Leading the investigation into the murder of Chloé Massard, a seasonal worker for the Ubayre estate, is the grumpy Inspector Cluzel, who discovers that the victim had done more than just help with the harvest. And getting more than they bargained for are Benjamin and Mathilde, both of whom end up suffering because of his intent to find the real killer.

Benjamin is in Burgundy at the Château du Clos de Vougeot, where he is the guest of honor for the wine-tasting event. He’s about to taste the first selection when local businessman Bernard Aristide arrives and demands his seat, which Lebel obliges. Minutes later Aristide drops dead from poisoned wine. Since the victim had initially declined to attend the event, the local police and Lebel conclude that he, not Aristide, was the target. 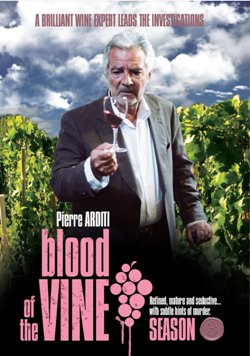 Thus Lebel becomes front-page fodder for local newspaper reporter Jean-René Bressel. He also discovers that several people had a motive for the murder, including the deceased’s widow Viviane and the occasionally successful wine-making Montclart brothers. And while Benjamin is busy conducting his own investigation and his protégé Silvère (Yoann Denaive, Terre de Lumière) is working and romancing waitress and wanna-be enologist Aurélie, several more murders take place.

Journalist Odile Six is digging up information about the land grabs by French-Luxembourgian businessman Loewen, one of Lebel’s former clients, and is killed near Colmar soon after contacting the enologist for information. After learning about her death from Lt. Isabelle Bory, Benjamin and Silvère head to Alsace, where the former helps Bory with her investigation and the latter assists enologist Thomas Barrateau with an infestation in the Loewen vineyard.

As it turns out, Odile was close friends with Elsa Kreutzler and her fiancé Hugo, and neither the couple nor Elsa’s ailing father, Vincent, appreciates Benjamin and Silvère’s meddling in their affairs, especially where their vineyard and feud with neighbor Loewen are concerned. Speaking of concern, Benjamin’s wife and fellow wine expert France Pelletier (Claire Nebout, Nicolas Le Floch) joins the pair in Alsace after another murder linked to her hubby is committed. And soon after another suspicious death, Benjamin comes face to face with the multiple murderer.

Yellow wine-maker Roch Orgelet is shot and killed at point-blank range. Fifteen days later, Benjamin and France learn of the supposed suicide from Philippe Nodier, the director of the Lauvermont winery, when they travel to Dole in the Jura area of the Franche-Comté region. It is here that Benjamin intends to relax and be supportive of France while she is set to oversee a vineyard acquisition by acquaintance Nancy Marigny.

It doesn’t take long for them to realize that Nancy is an ambitious schemer with self-control issues and a lover, Roch’s stepson Aurélien, that her 30-years-her-senior husband Jeff knows about. Following an argy-bargy at a local club where things get physical, there is a murder, and France is a suspect. With his holiday turning into anything but a relaxing getaway, Benjamin sets about finding the motives for the killings and the actual murderer.

As with the first two seasons, the stories in Blood of the Vine: Season 3 are complex and full-bodied, yet light enough to leave you without either cauchemars or hangovers (unless you imbibe your way through them), and filled with scenic vistas that stir up the wanderlust.

Note that while each epsiode is a standalone whodunit, the personal stories of Benjamin, France, Silvère, and Mathilde arc across all three seasons, so having knowledge of their backstories helps you to better understand certain situations in Season 3. If you haven’t seen Season(s) 1 and/or 2, their combined eight episodes are streaming at Amazon Instant Video. All episodes, whether streaming or on DVD, are shown in French with English subtitles.