I have been a fan of Jean Reno, he of the je ne sais quoi appeal, ever since he played Victor the Cleaner in La Femme Nikita. So how excited was I to see that the first-ever television series with him in the lead had landed on these shores.

And how disappointed was I, after watching the four (of eight) episodes currently available in the US, to witness that even Reno couldn’t raise Jo above the depths of second-rate TV.

Described as a detective drama with “mini The Da Vinci Code” episodes, Jo

is set in Paris, where iconic landmarks and neighborhoods such as Notre Dame and Pigalle serve as the backdrops for the crimes the intense, heart-attack-surviving Jo St-Clair (Reno) and his team investigate. It sounds great on paper, but on screen it’s a mess.

One of the things that irked me to no end was the Americanized English spoken by nearly every character (down to extras with a line or two), most of whom were supposed to be French, but were played by actors who are neither French nor American. (Jo/Reno spoke English with his delicious French accent. Thank gawd.) Some actors did better with sounding like Middle America, while for others it was easily discernible that the accent didn’t roll off their tongues. (Also maddening was why some place names, such as Neuilly, were pronounced en français while others, like Saint Cloud, weren’t.)

Moving on. The dialogue ranged from utterly lame (“At some point, Jo, arguing with you stops being a sport, it becomes a death march.”) to nowhere near credible (“Witness found him at 5:15 AM with no watch, no ID, no money.”), owing to the character not having checked. The latter example didn’t even track with what the witness actually said, so continuity was an issue, too.

Add to this certain bits of the action. For example: In an early scene in the “Notre Dame” episode, Jo saw the bloodied victim on the ground and, without having taken a closer look, declared the man’s eardrum had been pierced. Then, after looking up at the bas-relief on the cathedral’s facade, determined straight off that “The killer is sending a message. This was payback.” Not even The Mentalist would have arrived at this conclusion so quickly. And sorry, I just don’t buy that every member of the investigating team was so up on religious history that they all agreed the killer posed the victim’s body thusly to symbolize the dead man won’t hear the angels’ trumpets or receive God’s forgiveness. Puh-leeze.

But wait, there’s more! Characters weren’t set up well, action moved at too fast a clip, and details that could have made the stories more compelling were omitted, all for the sake of getting episodes down to the roughly 45 minutes that are standard for US TV dramas. 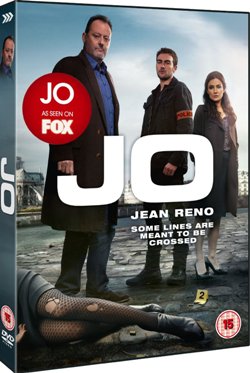 And as much as I hate to say it, even the acting was meh or sub-par. I get that much of this had to do with the scripts and directing, but still. As a British (and Euro) TV fanatic, seeing so many well-regarded British actors in guest roles — including Raquel Cassidy (Downton Abbey), Nicholas Gleaves (Scott & Bailey), Miranda Raison (MI-5), Christopher Fulford (Whitechapel), Danny Webb (Land Girls), Luke Pasqualino (The Musketeers), Patrick Baladi (Mistresses), and Matthew Marsh (Da Vinci’s Demons) — was terrific. If only I could say the same for their performances.

The saving grace, if you will, was that things got better (sort of) as the series progressed. Gorgeous shots of Paris, the Île de la Cité (where Notre Dame is located), the Place de la Concorde and its obelisk, les Invalides and the building that houses Napoleon Bonaparte’s (huge) tomb, and the seedy area of Pigalle, stirred up the desire to jet over to the City of Light. The sub-plot of Jo’s relationship with his daughter, which started off as shakily as their initial getting reacquainted, smoothed out and became the story I wanted to see more of (minus the nun). But for the “mini The Da Vinci Code” aspect, there was little to none of it in the four episodes, except for that trumpets/forgiveness business in “Notre Dame.”

The first four episodes of Jo

UPDATE: All episodes are now up on Hulu.