There is no shortage of characters with personal issues in Nordic noir programs, and some certainly have more than others. One that I am intrigued with, and would like to see more of, is the titular lead in the Swedish crime series, Sebastian Bergman.

On the surface, there isn’t a lot to like about the character of Sebastian Bergman. Played subtly and superbly by Rolf Lassgård (whom you might recall was the first actor to portray Wallander on telly), Bergman — a psychologist, criminal profiler, and author — is, quite frankly, an insensitive and insufferable boor, albeit one who can also be charming to certain members of the fairer sex.

Underneath his arrogant bleep-you stance, political incorrectness, and a penchant for (ahem) gettin’ busy, though, Bergman is a tormented soul. He survived the tsunami of 2004, but his wife and young daughter didn’t, a circumstance made worse by the fact that he tried but couldn’t hold on to his daughter’s hand when the mega-waves hit. Thus his clenched fists and horrific nightmares. (Not that he wasn’t an overbearing, self-serving prat before the tragedy, mind you. But still.) 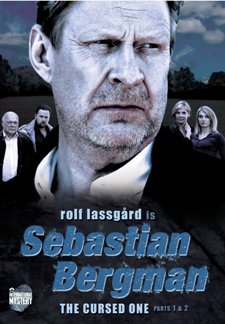 Anyhoo, we meet the burly Bergman in Sebastian Bergman: The Cursed One (Den Fördömde): Part 1,

an adaptation of the eponymous crime novel

(also known as Dark Secrets) by Hjorth Rosenfeldt. Within the opening minutes, we quickly realize that he is a player with bad dreams and a bad attitude.

Bergman has been away from Stockholm for 12 years, and has only returned to sell the house of his recently deceased mother. In the process of clearing out her things, he finds a decades-old letter written to her from Petra Andersson, one of his many lovers. Clearly, she wanted to tell him something, but what? The answer is a mystery that he sets off to solve.

Another is the identity of Roger Eriksson’s killer. The 15-year-old was found brutally murdered on a field, and the investigation seems to be going nowhere. Some evidence turns out to be false, and questioning those who knew the victim turns up little. CCTV footage finally offers some clues, but the case gets complicated when Bergman haps upon two more dead bodies and then learns the teen was more than he was made out to be.

And on the personal front, Bergman has a shocking discovery of his own.

When a third woman is found murdered in the same gruesome manner as two others, it indicates a serial killer is on the loose in “The Cursed One: Part 2.” The situation is dire and prompts Bergman’s former boss to begrudgingly involve the criminal profiler in another investigation.

Bergman immediately recognizes items left near the scene of the latest attack, evidence that the copycat killer has had personal contact with the original one, Edward Hinde, who has been in prison for his own heinous crimes for the past fifteen years. With the fourth victim comes Bergman’s frightening realization that the slain women were themselves clues pointing to the actual target of the killings. His dread intensifies when a fifth woman is abducted and time is quickly running out to save her.

The dark, dreary whodunit of Part 1 has a good plot, but too many flashback-type scenes end up muddling, rather than elucidating, the story. Part 2’s psychological thriller has not one but two crime drama clichés that, thankfully, are delivered in a way that allows the Bergman character to display more depth and thus give viewers more reason to care about what happens beyond “How will they catch the killer?”

As for my wanting to see more of Sebastian Bergman, it has as much to do with Rolf Lassgård being magnetic in the role as it does his character’s story within the overall narrative, including his relationship with the young detective Vanja Lithner (Moa Silén, Maria Wern), which is reminiscent of the one between Kurt Wallander and daughter Linda in the first Wallander series starring Krister Henriksson. Bergman’s flaws are obvious, but the conclusion of Part 2 points to his beginning to grow past his pain.

(Two new-ish episodes, the aptly named “Third Case” and “Fourth Case,” which screened in Sweden in late December 2013, explore more about Bergman the man, the Bergman-Lithner dynamics, and, of course, the crimal mind. Hopefully, they will screen in the US and UK in the very near future.)

Sebastian Bergman: The Cursed One: Parts 1 and 2

(Den Fördömde) are not currently screening in the US or UK, but are on DVD in a 2-disc set. Both episodes are shown in Swedish with English subtitles.