The Peabody Awards have announced this year’s Entertainment and Children’s programs winners, and amongst them is the Euro TV drama-thriller, Deutschland 83.

Of the 75th Peabody Awards‘ The Peabody 30, eleven television programs are winners of the prestigious award for excellence.

And of the eleven, only one series — the German spy thriller Deutschland 83 — is a non-English-language Euro TV program. 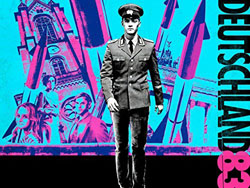 Deutschland 83 is a coming-of-age story set against the real culture wars and political events of Germany in the 1980s.

Since its premiere, the German-language drama has gone on to win several awards, including Best World Series at Séries Mania 2015 and Best Non-English-Language Drama at the 2015 C21 Drama Awards.

In addition, the UK premiere of Deutschland 83 on Channel 4 attracted millions of viewers, making the German series the highest-rated foreign-language drama in British TV history.

The Peabody Awards’ jury of sixteen board members unanimously selected Deutschland 83 and its ten fellow award recipients to recognize their excellence in storytelling of stories that matter. This, after the rigorous judging process narrowed down thousands of entries to just 60 finalists.

“A suspenseful, well-acted spy drama that takes place a few years before the Soviet bloc cracked and told from the perspective of East Germans and West Germans, it reheats Cold War conflicts in surprising ways.”

The 75th Peabody Awards ceremony gala will be held on Saturday, 21 May 2016, at Cipriani Wall Street in New York, and hosted by Peabody recipient Keegan-Michael Key. (You can purchase tickets to attend the event on the Peabody Awards website.) A special telecast of the gala will air on Pivot on Monday, 6 June 2016, at 8 PM ET/PT.