Euro TV fans, the long-awaited US premiere of the critically-acclaimed and audience favorite drama, The Legacy, is nearly over. Juhuu!

The winner of multiple awards, including the Golden FIPA for Best TV Series and Serials at the 2014 Biarritz International Festival of Audiovisual Programming, Best TV Drama at the 2014 TV Prisen Awards, and Best Danish TV Series at the 2015 Robert Festival, The Legacy (Arvingerne, or Heirs) is an intense family saga that goes deep into the hearts and psyches of the dysfunctional Grønnegaard clan.

In the first three minutes of the series opener, we meet the two individuals who play pivotal roles in The Legacy‘s story: Signe Larsen (Marie Bach Hansen, Borgen), a florist’s assistant and the mascot for the local pro handball team, and Veronika Grønnegaard (Kirsten Olesen, Daisy Diamond), a controversial and world-renowned artist.

The news from Veronika’s visit to the oncologist prompts her to light up a smoke and head to the florist to order 500 kroner worth of flowers for Signe to deliver, before returning to the rundown Grønnegaard estate that the former calls home. Here Veronika gets on with the business of living by doing what she does best — make art — while various members of her family make their way there to celebrate the holidays amidst the usual chaos.

Veronika’s eldest child is daughter Gro (Trine Dyrholm, Someone You Love), born of the union bewteen Veronika and Thomas Konrad (Jesper Christensen, Quantum of Solace), an avant-garde musician who’s as much a pot-smoking hippy today as he was when the two were together back in the Swinging ’60s. Following the disintegration of their relationship and Veronika’s marriage to the now long-deceased Carl Grønnegaard, sons Frederik (Carsten Bjørnlund, Rita) and Emil (Mikkel Boe Følsgaard, A Royal Affair) came along.

Each has a distinct relationship with the eccentric, devil-may-care matriarch (why not cut a hole in the ceiling to fit the Christmas tree) and chief purse-strings holder of the Grønnegaard clan. The single and childless Gro, the most devoted to Veronika, became a successful art gallery manager and her mum’s assistant (read: doormat). She’s also having an affair with the married art consultant, Robert Eliassen (Trond Espen Seim, Varg Veum).

An the other end of the devotion spectrum is Frederik, a high-powered attorney with a wife, Solveig (Lene Maria Christensen, Dicte), two children, and a decades-long grudge against Veronika that precludes his stepping foot in the Grønnegaard house. And in between these love/love and love/hate relationships is the dependent one held by the irresponsible Emil, whose closeness to Veronika seems mainly due to the money she sends him while he’s off on another entrepreneurial scheme in Thailand.

The worlds of the Grønnegaards and Signe, including her parents, handball team coach John Larsen (Jens Jørn Spottag, The Hour of the Lynx) and his team-helper wife Lise (Anette Katzmann, Flies on the Wall), and Signe’s handball-playing boyfriend Andreas Baggesen (Kenneth Christensen), collide after Veronika bequeaths the Grønnegaard estate to Signe and informs her that she is Signe’s biological mother — a secret the Larsens knew but had kept mum about.

But this act of generosity toward Signe, known to the Grønnegaards and Thomas as “Sunshine,” made during the throes of Veronika’s physical pain and emotional guilt, isn’t a straightforward matter.

Veronika had donated the Grønnegaard estate to the foundation for the Grønnegaard museum, something that Gro is determined to move forward by hook or by crook. Meanwhile, Frederik and Emil are gobsmacked and outraged that their inheritance isn’t theirs after all. And after Signe lets her three siblings know about their mum’s deathbed bequest, all helvede breaks loose.

As the series progresses, each of the Grønnegaards and Larsens must deal with his or her own greed, desperation, resentment, betrayal, and more, as more secrets spill out, relationships fall apart, and lives are forever changed in the wake of Veronika’s actions.

For viewers who purchased the DVD when it was released in the US back in April, you already know that The Legacy is a brilliant, binge-watch-worthy series. The threads are tightly woven, the action is well paced, and there is never a dull moment as the characters’ backstories are revealed and sticky situations unfold. 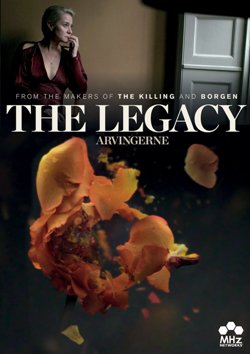 For all stateside Euro TV fans, The Legacy premieres in the US on MHz Worldview and MHz Online over five consecutive evenings as follows:

Season 1 of The Legacy ends with a cliffhanger, so check back for news about if and when Season 2 will screen in the States.

Danish broadcaster and production company DR announced in February that a third season of The Legacy is in the works, so stay tuned for news about it, too, as well as that for HBO’s remake of the series.