Sophomore seasons of television shows are an iffy lot. Sometimes they’re as good as the first, sometimes not. In the case of the Danish dramedy, Rita, it’s even better.

As noted in this post, Season 2 of Rita was due to arrive on Netflix in the US, UK, and other territories this year, as Season 3 is also set to screen in 2015 after it completes its just-started run in Denmark. Well, it’s here. And it’s terrific.

In the first season, Rita (award-winning Mille Dinesen, Borgen, Nynne), the eponymous sexpot of a single mum and schoolteacher, came face-to-face with her childhood issues while dealing with the effects of the ones her mid-teen, late-teen, and young-adult children have with her. In the second, she grapples with being a “normal” adult.

It opens a few months after the Season 1 finale. It’s a new academic year, and Rita is back teaching, now that her suspension is over. A merger brings new students and teachers to the school, including the seriously dishy Jonas (Alexandre Willaume, Those Who Kill), the former headmaster of the other school.

And Rita and headmaster Rasmus (Carsten Bjørnlund, The Killing, The Legacy) have put their hanky-panky-only days behind them and are in a proper relationship now. As for the bombshell Rita dropped on Tom (Carsten Norgaard, Dicte), her old flame and most recent fling (and her eldest son, Ricco’s, future father-in-law), she has to choose: baby or no baby. 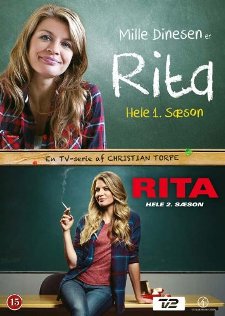 After dating on the QT, Rita and Rasmus move in together at her house and subtly announce their relationship at school. It’s all well and good for them (well, mostly), but her younger son, Jeppe (Nikolaj Groth, Mille), has problems with the “noise” at home, amongst other things, and this seems to be affecting his school work and grades in Jonas’ class.

Another student having problems, including truancy, is Mads (Lasse Fogelstrøm, The Hunt). Similar to Jeppe, Mads’ home life is troubled, albeit it in a different and more severe way, so Rita takes matters into her own hands to help the level 9 pupil make it through to the final exam without his being put into foster care.

Then there are others of her students, including the pregnant girl, the boy who’s in love with her, and the talented footballer whose chances of passing the final exam are slim.

Other teachers don’t have it easier, either. The teacher-parents of one student harass Hjørdis (Lise Baastrup, Lykke) to use their history curriculum for her class, another set prevents her from engaging anymore with their son, a young boy with Asperger Syndrome and a special bond with Hjørdis, and members of her body-conscious girl’s volleyball team won’t shower after practice. Meanwhile, a student clique’s ringleader bullies the nebbishy teacher, Erik (Tommy Kenter, The Protectors), until one act has severe consequences.

Elsewhere in Rita’s world, she and Jonas develop a friendship after their initial set-to, she and school counselor Helle (Ellen Hillingsø, The Protectors) do the same (sort of), Jeppe “mans up” with both his father and his boyfriend’s parents, Ricco gets a proper job, and Tom can’t (won’t) forgive Rita.

But this is Rita we’re talking about, so leave it to her to lie, put her foot in it, or be truthful at the most inopportune moments, and… well, watch the show to find out what happens.

As with the first season, there are life lessons aplenty in the second — from bullying and meaning well, to empowering and disempowering youths and adults alike — delivered in stories that are intelligent, touching, and humorous.

of Rita are now streaming at Netflix.