There are certain dramas for which one would do well not to take too seriously in order to enjoy the fun of them. The mystery/supernatural/romance miniseries, Dolmen, is one of them.

Early on during Dolmen‘s first episode, I thought, “This is dreck.” The acting was meh, the action was slow, and there seemed to be next to nothing to sink one’s teeth into (metaphorically speaking, ahem). So my inclination was to cut my losses and move on to another DVD, because I am loath to spend hours of my life that I can’t get back on something that doesn’t warrant it.

Interesting thing, though. I was already hooked; I just wasn’t consciously aware of it.

And as I kept watching, the show got better, without my having to lower my expectations, either. Shifting my perspective a couple of degrees — from “I hope this is as good as other Euro and Brit TV mysteries, to “Oh, this kinda sorta reminds me of Baywatch, only French, and without the bathing suits and the Hoff” — was all it took for Dolmen to move from ugh to guilty pleasure.

Here’s the deal with Dolmen:

When the miniseries debuted on France’s TF1 a decade ago, it was billed as a “summer saga.” Read: short-term soap opera, filled with the romance, family dramas, and personal struggles one would expect. The twist is the murder mystery storyline, which is actually well-crafted and compelling and made more intriguing by the supernatural elements. And the Breton island setting gives it the gorgeous factor that stirs up the wanderlust. 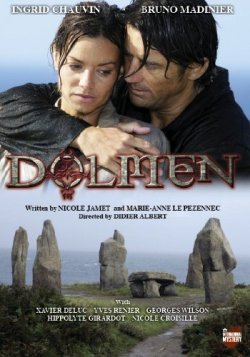 But soon after Marie’s arrival, strange and sinister things begin to happen, including the frightening dream she has night after night, the mysterious deaths of members of prominent local families, and the cryptic message to Marie held in the hands of the deceased.

“For Marie, He will judge. From the stone, blood will spill.”

Which it does. At the time of death, blood of each victim oozes from the symbol carved into one, then another, then another, of the menhirs on the cliff.

Enter Lucas Fersen (Bruno Madinier, Les Cordier, juge et flic), an ace detective sent to Ty Kern from Paris to handle the investigation following the first death. This doesn’t sit well with Marie, who’s just postponed her wedding indefinitely due to suffering the loss of a family member and her badge (temporarily). So she leads an unofficial inquiry of her own. And this doesn’t sit well with Lucas.

The rivaly and friction between the two isn’t the only unpleasantness. Many of the townspeople, who likewise don’t get along with each other (to put it mildly), want both Marie and Lucas off Ty Kern — him, because his questions could lead to their dark secrets being revealed, and her, because they believe her presence here brings with it a curse. One that hearkens to the centuries-old legend of the Shipwreckers, islanders who intentionally misdirected ships away from the lighthouse and caused them to crash on the rocky shores, so they could get their hands on the booty the vessels held.

Legend aside, evidence points to ritual killings, but why? And what’s the link to Marie?

Meanwhile, Christian is lost at sea during a race after a storm hits, and Marie feels a familiarity about Patrick Ryan (Yves Rénier, Commissaire Moulin) but can’t pinpoint the reason.

As the investigation continues, Marie and Lucas begin to let go of their one-upmanship and actually collaborate on the case as the body count rises.

And sure enough, a mutual attraction develops between them.

The opening episode achieved a 48.8 share of total viewing (meaning of all French TV sets tuned in to a program at the same time as Dolmen, the miniseries captured almost half of the total eyeballs.) The number continued to climb each week, and culminated in the record-breaking 53.1 share of total audience and 61.1 share of the women < 50 demographic segment — “the best scores ever for a summer drama series in France.”

As alluded to earlier, Dolmen‘s opener could leave one who is seeking serious drama wanting. But sticking with it does pay off. There are a number of “Wait, what?” red herrings, and the threads get denser and more entwined from episode to episode. Even the acting gets better. Whether this is somehow tied to Marie’s change in appearance from heavier make-up to a more natural look, I couldn’t say. Regardless, I give Dolmen